5,200 Milwaukee teachers took 92,691 days off last year and other shocking facts from the union contract

MILWAUKEE – EAGnews.org is releasing a series of stunning reports to show taxpayers exactly how our dollars are being spent in government schools.  We repeatedly hear from the education establishment that school coffers are being raided, requiring teachers to be laid off and programs to be cut.  We hear schools are on the brink of bankruptcy and are operating on shoe-string budgets. 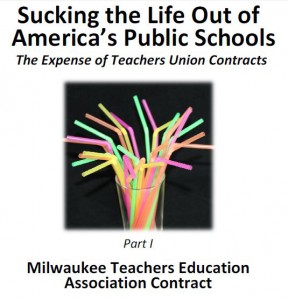 But local media outlets have long been derelict in telling citizens how the billions of K-12 dollars are really being spent.  How can taxpayers determine if schools actually do need more money if no one is tracking where the dollars are going?

In the first of a series of reports, EAGnews.org examined the teachers’ contract for Milwaukee Public Schools for the 2010-2011 school year and discovered a slew of expensive provisions. The numbers are shocking.

For starters, 5,200 teachers took a whopping 92,691 days off last year, for sick/personal leave, convention leave and “incentive” leave.  That level of teacher absenteeism – over 9% of the school year – resulted in $11.9 million being spent on substitute teachers.

According to data received from the Milwaukee district, teachers do not contribute to their retirement or health care plans.  Thus, MPS paid the full freight of those benefits for teachers – spending $56 million on pensions and roughly $128 million for health insurance.

While Gov. Scott Walker’s budget reforms now require school employees to pay a portion of both of these items, MPS extended its contract with teachers’ union members prior to the reforms passing. And that haste is generating millions in waste.

Milwaukee provides for teachers who want to retire early – at 62 – but don’t yet qualify for their full pension, which begins at 65.  Thus, taxpayers pay the difference of the pension they will receive at 65 and the one they receive a lower rate for retiring early.  MPS spent $15.6 million on that perk.

Have you detected an expense that directly benefits children?  Me either.  Yet Milwaukee, like too many other schools, continues throwing money out the door to make adults happy and maintain “labor peace.”  With this kind of reckless spending, it’s no wonder Milwaukee Public Schools are facing a financial crisis.