Wisconsin’s radical teachers use students to fight for collective bargaining

RACINE, Wis. – Wisconsin’s radical left-wing teachers are at it again.

And this time, they’ve incited their students to draw up a “Student Bill of Rights” and encouraged them to pack recent school board meetings in Racine and Milwaukee to insist that school officials adopt the document. 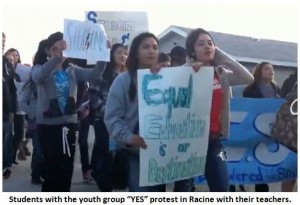 The students and their teachers marched from the Racine Labor Center to the school administration building Monday, where the school board voted to set up a committee to study the issue. The Milwaukee board had a hearing on the “Student Bill of Rights” last month and seems poised to adopt the measure.

But a recent article in the Caledonia Patch should provide enough information for any reasonable citizen to understand what’s really going on: A handful of politically charged left-wing “teachers” have brainwashed their students into fighting for teachers union collective bargaining privileges.

The whole episode is really nothing more than teachers using their influence to politically manipulate their students.

The effort is supposedly led by a student group, Youth Empowered in the Struggle (YES), which is affiliated with Voices de la Frontera, a far-left political outfit that fights for liberal immigration policies and union collective bargaining privileges and opposes most conservative ideas.

The groups are led by Horlick High School teacher Al Levie, who made a mockery of himself a couple months back when he refused to accept a humanitarian award from U.S. Rep. Paul Ryan at a local Martin Luther King Jr. event.

“Our teachers should have the right to collectively bargain because teachers know best what’s needed in the classroom,” J.I. Chase High School student Sam Kohlmann said, according to the Caledonia Patch. “As students, we are your customers and we need to be heard for our schools to get better.”

YES has also produced a video montage of students toting picket signs that read “We’re students not criminals” and “We support our teachers.” The video streams seemingly profound messages like “What would it be like … if students had a voice?” as catchy music plays in the background. The video concludes with “What would it be like if the Student Bill of Rights passes?” A tranquil lake appears with a dock leading to crystal blue waters with “Paradise” across the screen.

We have several issues with the “Student Bill of Rights” and the teachers who are using their students to advocate for their self-serving agenda.

Considering the radicals behind this movement, it’s very difficult to swallow the notion that YES students dreamed up the “Student Bill of Rights” on their own, without any influence from their loony left-wing teachers.

Levie has been known to drag students to protests across the state, and incite them to heckle lawmakers he disagrees with.

The talking points and word phrasing used by students pushing for the “Student Bill of Rights” seems to be ripped directly from the Big Labor playbook.

“This bill is about our education, our schools and our funding,” Horlick High School junior Cristal Sanchez proclaimed at the recent board meeting, the Patch reports. “You are our board of education, but you didn’t get our approval and we’ve had no input into the decisions that affect our education. We demand student power, the kind we’re showing here. I will not thank anyone for having my student voice heard loud and clear.”

But even if 1,000 students helped draft the document, as YES claims, we have a sneaking suspicion that they weren’t presented with all of the facts before going to work.

We doubt Levie informed his students that their demands likely would result in increased taxes for their parents, particularly if their parents are property owners. He probably didn’t explain that millions in school funding have been wasted on numerous teacher perks contained in local union contracts, like bonuses for unused sick days, paid time off for teachers to conduct union business, automatic raises, and extra teacher pay for everything from bus duty to sponsoring student clubs like YES.

Levie and his like-minded colleagues probably didn’t tell students that there are non-government schools in Wisconsin that produce amazing academic results with struggling students at a fraction of the amount spent by public schools. We’re sure YES student mentors don’t bother to explain that they fight alongside Big Labor leaders to keep more students from attending charter and private schools, where students, particularly minority students, are far more likely to go on to college.

We’d bet that YES mentors neglected to illustrate how schools are putting the money saved through Act 10 back into the classroom, preserving teaching positions and student programs that union leaders were willing to sacrifice not so long ago, before Act 10 put them in their place.

But, then again, the Milwaukee and Racine school districts are still bound by the provisions of their teachers contracts, because their local boards renewed the agreements shortly before Act 10 passed last year. Students don’t understand that district officials would have more cash to put toward student programs and reducing class sizes – key issues in the “Student Bill of Rights” – if they could implement Act 10 reforms.

Instead, Levie and company are going back to the Big Labor basics, using misinformation and distortions to incite a conflict over perceived injustices. But the reality is that Wisconsin’s most radical classroom teachers have duped students into doing their dirty work for them, while simultaneously robbing those students of the well-balanced education they’re supposedly fighting for.