CHICAGO – Chicago Teachers Union Vice President Jesse Sharkey apparently doesn’t like being called out on his documented, crystal-clear Marxist connections. Like so many other hardcore leftists, he tries to dismiss the questions as being part of a “witch hunt” and move on. 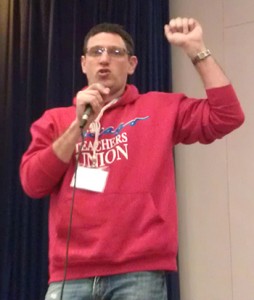 Sharkey was a guest on 890 WLS-AM Wednesday to discuss the proposed closing of some neighborhood schools in the Chicago district. According to the hosts, Bruce Wolf and Dan Proft, the cash-strapped district wants to close roughly 100 schools that are less than half full, and the union opposes the idea because some teachers would lose jobs and would stop paying union dues.

During the interview Sharkey touched on all the typical anti-school closure talking points that one would expect from a union-type who’s more focused on his members than students.

But the interview took a strange and revealing turn when the hosts asked about Sharkey’s appearance at the recent Midwest Marxism Conference at Northwestern University.

When they asked Sharkey where the Marxist “revolutionary movement” fit into the anti-school closure group, Sharkey laughed.

When asked why he appeared at the Marxism conference, Sharkey said, “Thank you for the 1950s McCarthyism. Every time that unions or social movements have raised issues about what’s fair and what isn’t and race and equality, people have branded them as Communists.”

He then stated that he did not speak at the conference. When challenged about whether or not he attended, he said, “I’m allowed to attend a Marxist conference, like, oh my God…”

When asked if he “subscribed to their beliefs,” Sharkey responded, “Looks, guys, I mean, if you want to have me on as part of a witch hunt…”

“You attended this conference,” one of the hosts persisted. “I’m just asking you what value you derive from this conference and what you had – how you see revolutionary movements, as so described, to connect to the teachers union. That’s all. It’s not a witch hunt – it’s what you did,” the host said.

Sharkey replied, “Look, gentlemen, I’m not sure where you’re going with this line of questioning.”

Perhaps Sharkey has never been confronted about his radical associations before, and how they influence workings of the Chicago Teachers Union.

The connections are plain as day, from telling sources.

The World Socialist Web Site lists Sharkey as a member of the International Socialist Organization. The socialists call him a member – not Glenn Beck or EAG. His own people say it.

On August 1, 2012, WSWS published a story referring to Sharkey’s influential presence within the union: “The International Socialist Organization – represented in the leadership of the CTU through its member Jesse Sharkey, the vice president of the union…”

A few weeks ago, Sharkey was smugly silent when asked about his Marxist connections by EAG.

This is America. Sharkey has an absolute right to hold any beliefs and belong to any organizations he chooses. But why doesn’t he have the courage to proudly admit who he is and what he believes?

Could it be because he knows the people of Chicago, despite all of their pro-union sympathies, may be a tad uncomfortable having a Communist in a top position in the local teachers union? Has his union asked him to keep a low profile with his freaky leftist political associations?

There’s no way to know, but he obviously doesn’t want to address the truth in public. It’s difficult to respect people who lack the courage to publicly defend their convictions.