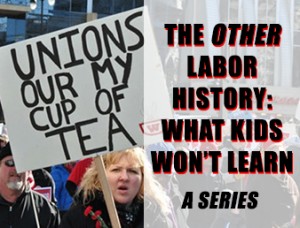 So much, in fact, that they recently eliminated Labor History Week from the state law books and replaced it with Labor History Month, with the first scheduled for this May.

That means starting tomorrow, Californians (particularly school children) will be getting a steady diet of pro-labor propaganda, displaying the history of the union movement in only the most flattering light.

That’s where EAGnews comes in. We believe it’s necessary to balance that stream of happy history with the rest of the story.

So starting Wednesday (which ironically is the socialist rallying day of May 1), we’ll launch a daily installment of “The Other Labor History: What Kids Won’t Learn.”

All month long – including the weekends because there are just so many rich examples – we’ll highlight a significant moment in Big Labor history that isn’t likely to be mentioned much during California’s Labor History Month.

We’ll share just a few of the many true tales of embezzlement, intimidation, physical violence and many, many other questionable moments in labor’s checkered past.

There are two sides to every story, and we won’t rest until the ugly side of Big Labor history is given equal billing.

The Sacramento Bee reports, “Gov. Jerry Brown, like the Democratic-controlled California Legislature, wants schoolchildren to learn about labor unions, preferably when they are in school and aren’t too busy with other matters.”

You know, like learning to read and multiply and think for themselves about various issues, like the true impact of organized labor on the American economy in recent decades.

“Labor History Month offers an opportunity to give all students something precious: knowledge of where their rights came from, and how to preserve them today.”

And we always thought our rights derived from the Bill of Rights in the U.S. Constitution. Silly us.

Can California teachers be expected to cooperate with this indoctrination effort? Consider the following from the California Teachers Association’s labor history page:

“As we honor our workers every day – and particularly those who hold our children’s futures in their hands, our educators – we also need to pull together and do the right thing to help return the economy to a healthier state.

“It’s time to strengthen our resolve and to reinvigorate the Union Movement. Working for a common goal – with everyone paying their fair share – will propel us to the more prosperous time of the recent past, a time when (we) weren’t stripping education budgets and other vital services, but enhancing them.”

Surely the schools will be using material from various sources, like the Chamber of Commerce, National Right to Work Committee or other business-friendly groups, just to present students with a fair and balanced picture of labor history.

Unfortunately we found no suggested Labor History Month materials that do anything but shine a steady ray of artificial sunshine on the topic. As if there’s nothing sordid, illegal or downright disgusting in Big Labor’s past that’s even worth mentioning.

The California recipe seems simple enough. Start with a dollop of Democratic politicians passing labor history bills with hugs and kisses, sprinkle in a heavy dose of politically liberal teachers presenting their personal views in classrooms, and voila, the unholy alliance has an instant indoctrination program ready to go, all funded with tax dollars paid by people who may or may not be progressives.

Do you think California students will learn about the Washington Teachers’ Union’s former president Barbara Bullock? In testifying against two of her colleagues, she admitted to embezzling a handsome $5 million from the union to buy such things as a $50,000 silver set in New Orleans and a $40,000 custom-made fur coat.

She and the two others “milked the union bank accounts to buy anything their hearts desired,” the Washington Post reported.

Will they hear the story of Neshaminy, Pennsylvania teacher David Ferrera? Last year he publicly accused his union of employing “terror and fear tactics” to keep teachers in line during a labor dispute with the school board.

Will they be told the story of Pennsylvania teachers union leaders vowing to “confront or shun” individuals who do not conform to the union’s agenda? The union was so serious about maintaining forced “solidarity” it produced a 31-page PowerPoint presentation on the subject.

How about a lesson about the Detroit Federation of Teachers? Putting its thirst to maintain revenue above teacher quality, the union demanded the firing of 70 teachers for non-payment of dues. What if one of those educators was the Teacher of the Year who provided wonderful service to thousands of school children? Too bad. This is what solidarity looks like.

Students would have a great time trying to figure out what happened to legendary Teamsters President James Hoffa, Sr. Now there’s a juicy tale of how Big Labor sometimes handles its internal disagreements and power disputes. And they didn’t even bother with a funeral.

This is just a sampling of the version of labor history we’ll be offering for the next month. We hope you will check out the daily entries and share them with others. There’s a lot more to be learned than the classroom activists in California would lead you to believe.