GREEN BAY, Wis. – There’s no doubt that the Green Bay school district, like all of its counterparts throughout Wisconsin, has been struggling with state funding cuts
caused by the recent  recession. 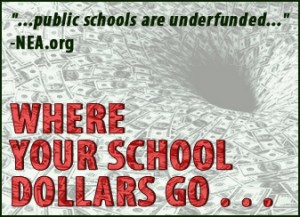 That’s why the district was forced to make spending cuts and pay freezes in employee compensation in the current school year to erase a $9 million budget deficit.

But an inspection of school spending records suggests there may be areas where the district could still trim or eliminate some significant costs to save crucial tax dollars.

EAGnews recently obtained copies of the Green Bay district’s check register and credit card statements for fiscal year 2011-12. An analysis of the spending records revealed a lot of expenditures that could be considered questionable during tight budget times.

That list includes nearly $200,000 for travel, mostly for hotel and airline costs; food service expenses that included more than $240,000 for restaurant-prepared pizza and Pepsi-Cola products; more than $112,000 on cell phones for school staff; nearly $300,000 in payments to law firms; and more than $30,000 spent at various restaurants.

The district also dropped more than $40,000 to hire a consultant that works with school staff on cultural sensitivity issues.

This is the first in a series of five reports on spending in Wisconsin school districts. The purpose of this project is to shine the sunlight on frequently ignored spending patterns in public schools, to keep citizens informed and school officials honest.

A complete copy of the district’s check register and credit card expenditures is attached to this story.

Despite their attempt to undercut our credibility last week with a panicky press release, it should be noted that Green Bay district staff was very cooperative in responding to EAGnews requests for records and details regarding various types of expenditures.

A good portion of the district’s travel expenses were related to workshops and conferences for teachers and other staff members at various locations around the nation. Many of the trips involved lodging at pricey hotels as well as airfare.

Many school districts rationalize large travel budgets for professional development because much of the cost is usually covered by federal or state grant money.

Records show that a significant portion of the Green Bay district’s travel costs for 2011-12 were paid for with school funds, using no grant assistance.

The district also picked up the entire tab for staff participation in an educational conference in Lake Tahoe, California in 2012. Nine separate payments were made to the Granlikbakken Conference Center and Lodge for a total of $4,692.

The Green Bay district also covered the cost of a lot of air travel.

Many other expensive trips around the nation were funded with grant money, according to the district.

While those trips were not directly financed with district funds, tax dollars were still spent.

There were several oddities on the travel tab, including $570.40 spent on a shuttle from an airport to an unlisted destination on Sept. 28, 2011.

School officials across the nation argue that professional development and networking are crucial for educators, and that usually involves travel.

But in tough economic times some questions deserve to be answered, like whether fewer people could attend events and bring back information or techniques they learned to share with others, whether technology (like Skype) could be used to link professionals to various events, and whether less expensive lodging could have been used for various trips.

Food service items purchased from outside vendors also added to the district’s expenses in 2011-12.

The district paid out a whopping total of $125,558.79 in 35 different transactions to Domino’s Pizza. Another $114,474.78 was spent in 37 transactions with Pepsi Cola of Northeast Wisconsin. District officials say the pizza and beverages (non-soda) are sold in school, resulting in a slight profit.

Pizza was a major item, which may not be surprising with school children involved. The district spent a total of $5,885.80 on pizza in 70 total transactions with various establishments (not counting the Domino’s purchases listed above), including Little Caesar’s, Gallagher’s Pizza, Papa John’s and Pizza Hut.

This appears to be freebie pizza, not the type bought and resold.

Not all the restaurant purchases invovled fast food or inexpensive menus.

The Green Bay district also paid $42,800 on June 15, 2012 for the services of Gary Howard, who runs workshops at schools around the nation based on the concept of racial and cultural inequity in education.

While we don’t know the details of Howard’s work in Green Bay, he was a guest speaker at the 2012 CREATE Wisconsin conference, a controversial state-funded teacher training program that focuses largely on the theory that education is too centered on traditional white culture, causing many minority students to be unfairly assigned to special education or lag behind academically.

Many of the more radical contributors to CREATE Wisconsin focus heavily on the controversial and divisive concept of “white privilege.”

Legal costs are certainly an unavoidable expense for any government entity these days, and the Green Bay school district is no exception. The district paid out a breathtaking total of $297,634.45 in 200 separate payments to various laws firms in 2011-12, according to records.

Which of those legal costs were necessary, and how many could have been avoided, might be a worthwhile exercise for the district budget staff.

Finally, there was a hodge-podge of various types of expenses equaling at least four figures. Here are just a few examples:

Petty cash spending district-wide came to $49,520. The district paid PMI Entertainment Group $10,533.50 for building rental for graduation. Nine payments to the National Staff Development Council came to $29,781.57. Six payments to Seroogy’s Chocolates came to $4,005.20. A single payment to the Wisconsin Association for Equity in Funding (a political organization of Wisconsin school districts) came to $7,500.