SAN FRANCISCO – On Thursday, EAGnews published a story about an incredibly biased Liberalism vs. Conservatism crossword puzzle handed out to students in a civics class at Union Grove Elementary School in Racine County, Wisconsin. 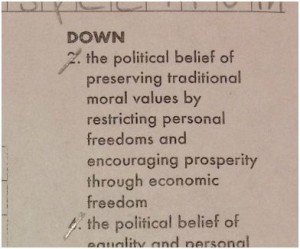 Tamra Varebrook, a local conservative activist whose eighth-grade daughter received the lesson, contacted EAGnews about the blatant political bias and effort at student indoctrination, disguised as a “civics” lesson.

“The definitions of conservatism and liberalism make me sick,” Varebrook told EAGnews. “I think it’s horribly distorted and it’s biased.”

Varebrook later received a telephone call from the school principal, apologizing for the crossword puzzle.

Today, Cerebellum Corporation – which distributes the Liberalism vs. Conservatism lesson created by Sunburst Visual Media in 2001 – announced it agrees with Varebrook and is discontinuing the misleading materials.

“Although we are careful to screen the quality of our products, we are not always able to identify the problems seen in Liberalism vs. Conservatism,” Cerebellum President James Rena said in a statement sent to EAGnews.

“As a company we believe in balance. This product is clearly skewed and we find that unacceptable and counter to our culture. We sincerely apologize for this mistake and will rectify it by immediately discontinuing the product,” he said.