The book, which supplements the school’s Common Core curriculum, blames television for the negative behaviors the first African-American president picked up as a teen: 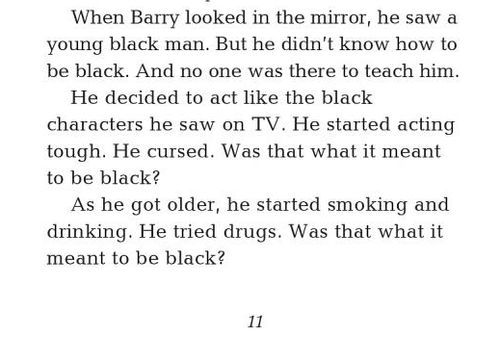 The book – brought to the attention this week of those on the “Moms Against Duncan – MAD” Facebook page, goes on to say white Americans were hesitant to vote for a black president, and that Obama pushed the race issue to bring the nation together.

“But some people said Americans weren’t ready for that much change. Sure Barack was a nice fellow, they said. But white voters would never vote for a black president. Other angry voices were raised. Barack’s former pastor called the country a failure. God would damn the United States for mistreating its black citizens, he said.” 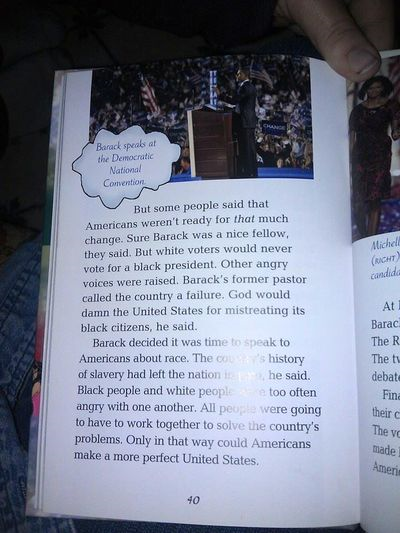 The Bluffview Elementary students were told the book’s content would be tested for grades. That brought outrage among parents just across the Mississippi River from St. Louis, one of the “MAD” moms reported.

This biography of America’s 44th president, entitled “Barack Obama,” is written by Jane Sutcliffe and published by Lerner. The book is part of Scholastic’s “Reading Counts” program acceptable to the controversial Common Core curriculum standards.

An online sampling to “Barack Obama” is available HERE.

As to the “Moms Against Duncan” (MAD), which formed on Facebook to pushback on U.S. Secretary of Education Arne Duncan’s recent comment about “white suburban moms” and their resistance to the national Common Core curriculum standards, here’s what one of the MAD moms wrote this week about Duncan and Common Core:

“Duncan’s foot-in-mouth-disease comes from the fact that he doesn’t understand that this is no longer a political thing. This is about our children. As a teacher who left the classroom because of Common Core and the abuse of our children, I can promise it has nothing to do with color, or sex, or education level, or income, or political party. As a Democrat myself I will be voting all over party lines in November. If you support Common Core….we will show you the door. There are a lot of Dems who have signed onto Harkins bill, which will effectively remove all local boards of education, and they need to watch their re-election bids carefully.

“As the co-founder of MAD (Moms Against Duncan) we are linking groups of parents all over this country together. Our ultimate goal is a 10% standardized test opt out rate in every school K-8. We will corrupt the data so it is useless. No school scores, no teacher scores, no student scores. No databases, no prison planning data, no economic development data. Pearson, Gates and Duncan can kiss our multicolored backsides. Our children are NOT data. We want all this wasted money back in the hands of our teachers.

“If Arne Duncan thinks he can take a poop on someone’s yard and apologize by saying “it would have looked better if I’d been over a few feet” he is sadly mistaken. We are America’s MOMS (and Dads) and WE ARE MAD!!!”

Illinois Review has reached out to the school’s 4th grade teachers as to whether parents have complained to them about the book.