NORTH TONAWANDA, N.Y. – More schools are pointing out the emperor has no clothes, or in this case, isn’t eating the “rabbit food” being given to everyone else.

New York’s North Tonawanda Board of Education is the latest to lash out at the new school lunch rules championed by First Lady Michelle Obama.

“We left thinking, what are we feeding these kids?” school board president Colleen Osborn, said at a recent meeting, according to the Tonawanda News.

“We have students of all different shapes and sizes. Some of these kids have lunch at 10 a.m. and then they’re limited and can’t buy other things. It’s a broken system.”

The paper reports the board is concerned students may be going hungry.

After taking comments from parents, “Someone in the audience made a good point.”

She added, “Michelle Obama put these things into play, but her children go to private school and they don’t have to follow these standards.”

The board is evaluating the program because the restrictions are having an adverse effect on students, particularly athletes, and the portions and quality aren’t what they used to be.

“I used to teach in North Tonawanda,” said Board Trustee Ann Finkle, according to the paper.

“At Spruce we had a wonderful in-house cook, there was fresh, homemade, wonderful food, and it was delicious. Now they have to use wheat flour for everything, the hot pretzels don’t have salt and you can’t buy nacho cheese to go with it.”

The News notes students are no longer allowed to purchase a second lunch.

Finkle says when she talks to students, they’re “not impressed” with the changes.

Referring to Obama, the board member said, “I’d like to see what her kids eat at school, they have gourmet chefs and I would like to know the counts on their diets.”

In contrast, for example, students in the Pleasanton, Texas district are given what amounts to “rabbit food,” in the opinion of some parents. 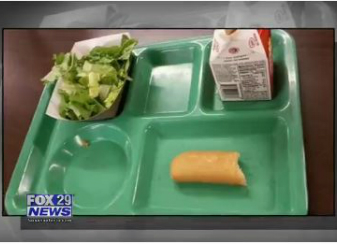 “I was outraged when I saw that picture – I just didn’t even know what to say.”

“There’s a salad that just lettuce – no tomatoes, no carrots,” another parent says.

“The challenge is trying to come up with menus that meet those guidelines and are appealing to kids,” district superintendent Cynthia Clinesmith tells Fox 29.

The Tonawanda News reports the only way for the New York school district to change things is to opt out of the National School Lunch Program and give up the federal reimbursements.