MARLBOROUGH, N.H. – The people who bring Christmas joy to the children of Marlborough, New Hampshire are not going to be dissuaded by the politically-correct Grinches in their local school administrative office.

Every year, American Legion Post #24 of Marlborough, along with the local Lions Club, stage a public Christmas tree lighting in front of the community building in the center of their town.

The event always attracts many parents and children, who are treated to gifts from Santa and Mrs. Claus, along with doughnuts and hot chocolate.

To get the word out about the lighting every year, the American Legion posts fliers in local schools. They have to receive permission from the superintendent’s office, but that was always a formality … until this year.

John Fletcher, commander of the American Legion post, said he recently received a letter from Rob Malay, the new superintendent of School Administrative Unit 29, saying the fliers for the Christmas tree lighting could not go up this year unless the word “Christmas” was removed and replaced with another word, like “holiday.” 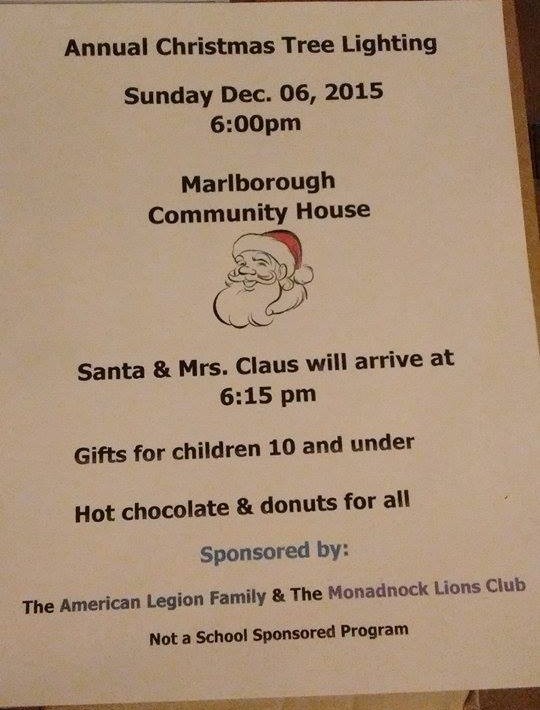 Fletcher refused to use the word “holiday,” because, as he put it, “It’s a Christmas tree, not a holiday tree.” He compromised and removed “Christmas” from the fliers, so the children would know about the tree lighting, which will go on as scheduled on Dec. 6.

But Fletcher is not happy about the changes to the fliers. He wrote a letter to the local newspaper, expressing his disappointment in the stand that the superintendent took.

“For years we have had a Christmas tree lighting and now it’s supposed to be a holiday tree lighting?” he wrote in the letter, which was posted on SentinelSource.com. “As commander of the American Legion it offends me.

“On Veterans Day, I spoke of the freedoms we have and the veterans who have not only served their country but have given their lives for what we have today: freedom of speech, freedom of religion, freedom from want, and freedom from fear. These are solid foundation stones upon which a great nation is built.

“It seems to me that our new superintendent, Rob Malay, doesn’t understand this. I can’t believe the SAU board approved this.

“I respect all rights; always have. But, do not take away our rights because you may offend someone else.”

Fletcher said he did not receive an explanation from Malay about the change in policy, but he assumes it’s related to an ongoing effort by some people to remove any sort of reference to the Christian religion from public schools.

He said he’s heard from many people in his community and they’ve all been “very supportive.”

“Even though it’s not a school function – which it says right on the flier – I was informed that unless we took the word ‘Christmas’ out we couldn’t put them up in the school,” Fletcher told EAGnews. “My wife spent two days with white out, erasing the word ‘Christmas.’

“I am going to be following up on it. I’ve already had a few radio stations call me. It really isn’t going to matter, because the lighting will be over by then.

“I’m tired of the political correctness. It’s gotten out of hand.”

Superintendent Malay did not return a call from EAGnews.