CHICAGO – Chicago teachers are ready and willing to walk out on their students over money issues.

The Chicago Teachers Union contends that 88 percent of its members voted in favor of allowing union bosses to call a strike over collective bargaining negotiations that have stalled in part because of the school district’s half-billion dollar budget shortfall tied to teacher retirement costs. 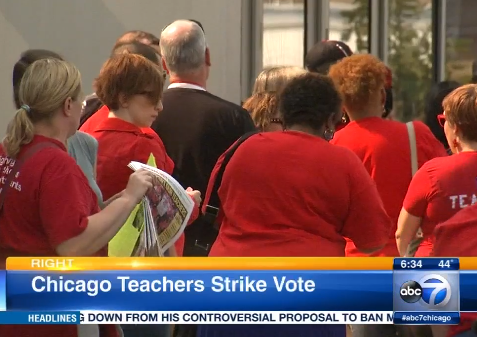 ABC 7 reports a total of 22,678 CTU members out of an eligible 24,752 voted over three days on whether or not to walk out on students to get what they want.

“Chicago Teachers Union members do not want to strike, but we do demand that you listen to us,” CTU VP Jesse Sharkey said in a statement aimed at Mayor Rahm Emanuel and CPS CEO Forest Claypool, according to the New York Times. “Do not cut our schools, do not lay off educators or balance the budget on our backs.”

The CTU counters that CPS officials are looking to cut about $653 million in labor expenses in the new contract and could layoff educators next school year if they don’t receive a huge bailout from state lawmakers soon.

District and union officials have been working to hash out a contract since the previous pact expired in June, an agreement that was reached only after a week-long teachers strike in 2012. The Times reports both sides are still at odds over teacher evaluations, salaries, pension contributions and standardized testing issues.

“We have the highest respect for our teachers’ work, and while we understand their frustrations, a strike that threatens to set back our students’ progress is simply not the answer to our challenges,” Claypool told the Tribune.

“So rather than strike, we ask that the Chicago Teachers Union join us to fight for our shared goal of equal education funding from Springfield for Chicago’s children.”

Mayor Rahm Emanuel urged the city’s educators to put their energy to better use.

“You’re putting a lot of energy into a strike. My only request is that you put as much energy into a solution. Chicago Public Schools face a massive deficit. Put the energy toward a solution,” Emanuel told ABC 7.

Illinois law requires at least 75 percent of union members to vote to authorize a strike, which can only occur once both sides have engaged in the fact-finding process for at least 105 days.

CTU officials have pushed CPS to move to the fact-finding phase, but city negotiators have resisted, prompting the CTU to file an unfair labor practice claim with the Illinois Educational Relations Board last week, according to the news site.

As city officials have focused solely on securing a huge cash infusion from the state to fix CPS’ chronic budget problems, CTU officials have worked their members into a tizzy with rallies and other action.

“Now it’s time for us to act. We’ve been here before,” CTU president Karen Lewis, who lead teachers on strike in 2012, told attendees at a recent rally in Grant Park. “No teacher wants to go on strike. We prefer to be in front of our students. But we know that when we must, we will withhold our labor.”