LA CROSSE, Wis. – When a contractor’s truck at the University of Wisconsin – LaCrosse sported a Confederate flag across its grille in November, one official was quick to condemn the contractor, call for the flag’s removal, and – it turns out – even asked for an informal police investigation into the matter. E-mails obtained by the LaCrosse Tea Party show Paula Knudson, Vice Chancellor for Student Affairs at the school, went farther than previously known in her efforts to get the flag removed and the contractor punished. 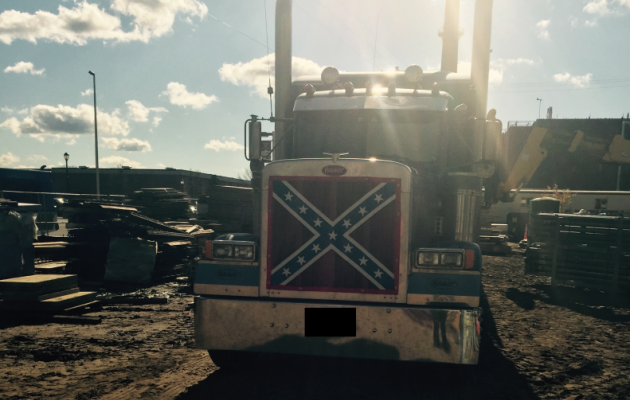 Upon learning of the flag’s presence on campus, Knudson e-mailed Doug Pearson, the head of Facilities Planning and Management for the school, to ask that the contractor be told the flag needed to go. The contractor quickly and willingly complied and Knudson went on to e-mail the entire UWL campus – students and faculty – to express her regret over the incident and say that she was “personally. . . offended and. . . very sorry for the fear and angst caused by its presence.” [Emphasis added]

At the same time, e-mails reveal, Knudson e-mailed pictures of the truck to interim UW-LaCrosse Police Chief Scott McCullough with the subject line “License please?” After reading Knudson’s campus-wide missive, McCullough responded to say he read her e-mail to mean that there was no longer any need for police action since the flag had been removed.

McCullough also went on to reference another incident with yet another truck that displayed the Confederate flag and urged Knudson to remember that the police cannot run license plate numbers without a valid excuse to investigate the vehicle. “I would like to take a second and make clear that like the last truck with this emblem, I would need to be conducting a police investigation into some violation (I believe it was harassment last time) before I can run this plate,” he wrote.

“It could be literally only seconds talking with a complainant but it is an important protection to all of us that even the police cannot simply run records checks for no reason,” he went on to say. “Please don’t take this as any hesitation on our part to help just that we have very specific rules that we (the police) need to follow.”

At least two students who were offended by the flag took action on their own and approached the construction site to express their indignation according to an e-mail from facilities chief Pearson. “The job site superintendent was concerned about two students who walked into the job site and confronted the trucker,” Pearson wrote in an e-mail to Knudson that included UWL Chancellor Joe Gow. “The superintendent indicated they [the students] were rude and were baiting the trucker to say something. I can help resolve these issues, but staff and students should not be walking into a job site without proper personal protective equipment.”

The following day, Chancellor Gow e-mailed Knudson to chide her for how she handled the situation. He urged her to point out “the trucker kindly complied” with the school’s request that the flag be removed. “We need to refute the notion that we have somehow ‘banned’ display of the confederate flag, because we don’t have the legal authority to do so. And we wouldn’t want to stifle free expression no matter how uncomfortable it might make us feel [emphasis added],” Gow concluded.

In public statements made after Media Trackers first broke the news of the incident and published a picture of the truck, Gow said the Confederate flag “clearly is a racist symbol,” but acknowledged that UWL would have allowed the trucker to continue to display it had he refused to remove it.