JACKSONVILLE, Fla. – Jacksonville officials recently arrested a 14-year-old student who alleged to be with ISIS when she posted a threat to kill students over social media last week. 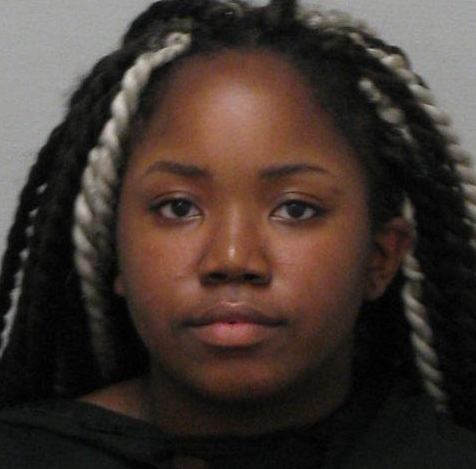 Police arrested Douglas Anderson School of the Arts student Amani Bracy in class Wednesday after they allege she and another student made threats to “shoot up the school” through the instant messaging app Kik, WJXT reports.

The teens allegedly claimed to be members of ISIS who hacked into the school board’s computer servers to get personal information. Bracy allegedly told another student to warn her friends of an impending attack at school, “giving them all a chance to live,” WJAX reports.

“I guess you will learn when you die and go to hell,” the message read, according to the police report.

A student reported the messages to authorities and police used the Kik account to get more details from Bracy, who said the duo planned to carry out their attack with AK-47s and sniper rifles in the senior parking lot before moving to the dance hall, police told the news site.

Another suspect, identified only as Malik, also advised against contacting police.

“Don’t dare call the police, we gone murder u if u do,” the warning read, according to WJXT.

The school was put on lockdown while police continued their conversation with Bracy and eventually she revealed her real name, police allege. She was then arrested in class and escorted from the building without incident.

“I do feel surprised. I wasn’t expecting it, not from my school,” sophomore Dara Lewis told WJXT.

Lewis said she knows Bracy from school and church. 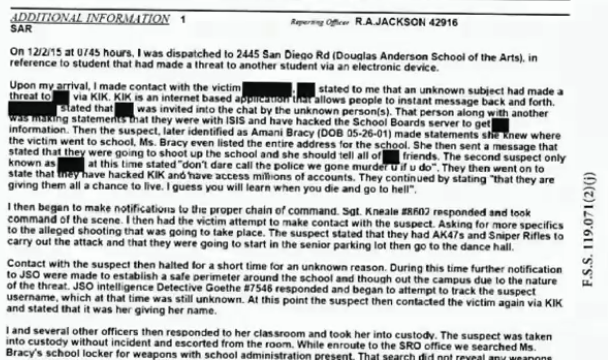 “When I saw her, she wasn’t really weird, but she was more so, she just seemed like a regular student,” Lewis said. “She just blended in.”

“It’s a good example of students taking ownership of the kind of culture they want to see in their own neighborhood and school,” Vitti said. “Without that student coming forward and telling our officer that these threats were made, we may not had known about it.”

He said school officials are reviewing the case to determine Bracy’s fate in the district.

“We’ll look at this individually in light of the code of conduct but also what happened as far as the criminal justice system is concerned and we’ll make a determination if this child should be expelled or at the minimum most likely transferred to another school,” Vitti told WJXT.

Many folks online seemed to think a serious punishment was in order.

“She … needs to be removed from a public school and placed some place where she can (get) the help she needs,” Old Dog posed to WJAX.

“She really does need to be punished for making threats like she did and for terminal stupidity, but I seriously doubt that she is any kind of terrorist,” Truthtracker wrote. “If she is like most teenagers today, she probably can’t even spell ISIS and she couldn’t tell an AK47 or sniper rifle from her daddy’s toilet plunger – if she even has a daddy.”