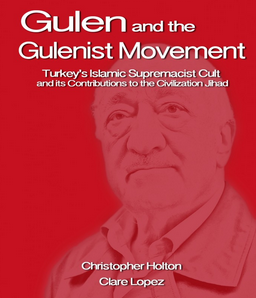 The Center reports the Muslim Brotherhood – an organization that strives to impose Islamic shariah law on the world – defines “civilization jihad” as a way to “destroy us from within” by exploiting the country’s polices, customs and services.

“One of its prime practitioners in this country is the Gulen Movement, a cult/business empire led by a reclusive Turkish expatriate, Fethullah Gulen, who operates from within an armed camp in the Poconos,” according to a Center for Security Policy release.

“As ‘The Gulen Movement’ monograph makes clear, one of the most troubling aspects of this cult is its success in advancing the Islamic supremacist agenda – albeit under the guise of Turkish nationalism – via one of the fastest-growing networks of publicly funded charter schools in the United States.”

The Center points out Gulen himself is wanted on international arrest warrants and is currently under investigation by the U.S. government for his involvement in more than 200 allegedly illegally funded trips to Turkey for Members of Congress.

Center president Frank Gaffney contends the organization’s most recent report shows the Gulen Movement preaches about harmony, “interfaith dialogue,” tolerance and peace, but the movement’s true intentions are much darker.

“In short, the Gulen Movement in Turkey, the United States, and worldwide promotes a far-more problematic program than its adherents would have us believe. It is not a benign cultural and educational institution, or even a billion-plus dollar commercial empire. Rather, it is a prime practitioner of civilization jihad, enabling the spread of the Islamic supremacism’s shariah doctrine under the banner of a Turkey that aspires to renew its role as the Caliphate of the Ottoman empire’s glory days,” Gaffney said.

“U.S. school districts, parents and students, federal, state and local governments, media organizations and academic institutions have clearly been successfully targeted by the Gulenists’ influence operations,” he said. “It is essential that we expose the true nature and civilization jihadist ambitions of Gulen’s taxpayer-subsidized educational empire and the favors its parent movement has deployed – notably, via all-expenses-paid trips to Turkey.”

The website Turkish Invasions – maintained by a group called Citizens Against Special Interest Lobbying in Public Schools – lists a total of 146 schools within or tied to the Gulen Charter School network that stretch across 26 states and the District of Columbia.

It was the Movement’s attempt to establish a school in Virginia’s Loudoun County that triggered the Center’s interest in the group three years ago, and the research collected since and included in the report puts the Gulen Movement’s into perspective for local officials who may be considering one of its schools.

“The Gulen Movement” not only explains the group’s formation, history and background, but also highlight the mentality and perspective of its leader, Fethullah Gulen, with quotes pulled directly from his 1998 book “Prophet Mohammed as Commander.”

“ … (M)uslim believers should also equip themselves with the most sophisticated weaponry. Fore has an important place in obtaining the desired result, so believers cannot be indifferent to it. Rather they must be much more advanced in science and technology than unbelievers that that they should not allow unbelievers to use ‘force’ for their selfish benefit,” the Center quotes from Gulen’s book.

“According to Islam, ‘right is might;’ so, in order to prevent might from being right in the hands of unbelievers and oppressors, believers must be mightier than others,” Gulen wrote.

“An Islamic state …. Should be able to secure peace and justice in the world and no power should have the courage to make corruption in any part of the earth. This will be possible when Muslims euip themselves with a strong belief and righteousness in all their affairs, and also with scientific knowledge and the most sophisticated technology.”

The Center for Security Policy recently discuss the concept of civilization jihad with conservative media host Glenn Beck in the context of the 14-year-old Irving, Texas Muslim student Ahmed Mohamed, who was detained when he brought a suspiciously bomb-looking clock to school this fall, EAGnews reports.

The Center’s Jim Hanson told Beck on TheBlaze that he believes the clock incident was an example of civilization jihad, and it’s likely Mohamed and his family staged the incident to gain publicity.

“It’s part of their playbook,” Hanson told Beck. “They call it ‘civilization jihad,’ that’s a Muslim Brotherhood term. And they use that as a way to use the freedoms of a society against it.