FARGO, N.D. – A North Dakota father is calling for the resignation of his son’s high school principal after the “far left progressive” banned the senior’s yearbook photo because he claims it’s “illegal.” 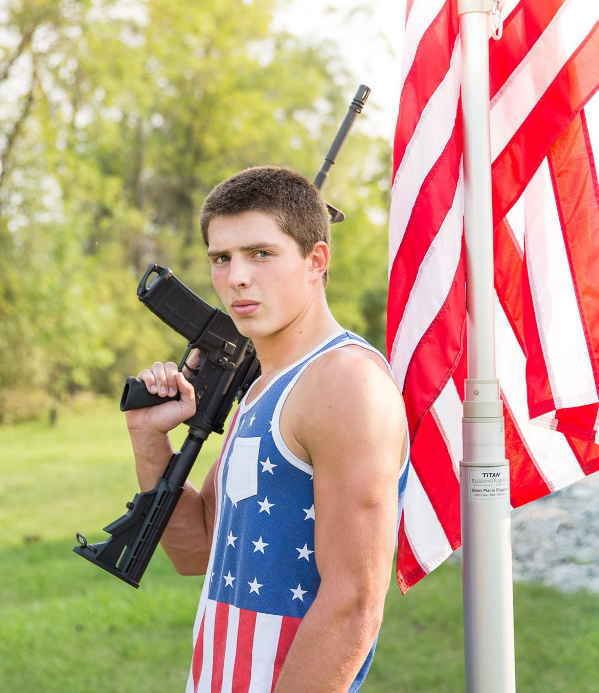 Fargo North High School Principal Andy Dahlen told the Fargo Forum he rejected 17-yar-old Josh Renville’s senior portrait for the school’s yearbook because it violated three school policies that do not specifically pertain to the yearbook.

According to the site:

One bans the carrying of weapons on school property; another prohibits publishing of materials in school-sponsored media “that violates federal or state law, promotes violence, terrorism, or other illegal activity …”; and a third bans clothing that advertises or promotes weapons.

While acknowledging none of the policies specifically prohibits photos of weapons from appearing in the yearbook, Dahlen said “it’s the combination of those three policies that we’ve interpreted prevent it.”

The “controversial” image shows Renville standing alongside of the American flag, wearing a stars and stripes tank top, with a rifle he built himself resting on his right shoulder. It was taken off of school property, and Renville is clearly not posed in any type of threatening manner.

Renville’s father, Charles Renville, spoke with the principal about the decision, and Dahlen apparently refused to reconsider. Charles Renville, a 30-year Air National Guard soldier, took to Facebook this week to update his followers and vent his frustrations about the situation, a post that sparked a social media firestorm that’s drawing national media coverage.

The father writes that the picture is now under review by the district’s associate superintendent, details his conversation and thoughts about Dahlen, and explains why the image means so much to his son.

My first update! Josh’s picture is now under review by the Associate Superintendent Bob Grosz. But a interesting…

“So this is the state of freedom ion our nation today! Fargo North High School has rejected this picture for Josh’s year book …. Because in their words it promotes violence and breaks state and federal law, really! How? Well I called Andy Dahlen … he is trying to state that people cannot bring guns on school property, in his words ‘it’s the law,’” Renville wrote.

The father questioned why other images in the school that contain guns – library books on hunting, or wars with American soldiers – seemingly don’t face the same scrutiny, or why yearbook images of guns used by high school trap and skeet teams are not held to the same standard.

“What item is illegal in this picture?” he wrote. “I see a kid that loves his nation, loves free speech and loves the second the 2nd Amendment. The rifle is a rifle he built and it is his favorite rifle.”

Renville then pivots to Dahlen.

“Dahlen just doesn’t like rifles, he doesn’t believe in or support the Second Amendment. He is a far left progressive who is using his position to promote his political agenda and push it on our children,” Renville wrote.

He has singled out my family over the years because of our traditional conservative values and beliefs! In my opinion he is out of control and morally bankrupt person who has been in his position way to long! He seems to have absolute power at Fargo North High school, and tries to bully teachers, students and families that disagree with him! Enough is enough he needs to be fired! So begins the fight for freedom……. we are only as strong as our weakest link!

Renville alleged Dahlen told him the school has received calls about the controversy and nearly 90 percent of callers supported the principal’s position.

The conversation prompted Renville to post Dahlen’s direct phone number online, and encourage his followers to voice their opinions on the matter.

As Renville’s post quickly swelled to more than 1,660 shares, the conversation online forced local, regional and national news outlets to focus in. Meanwhile, leftist columnists like the Forum’s Mike McFeeley are trying their best to squelch the growing outrage.

“Is it about getting your kid’s preferred photo in the yearbook or saving the world?” McFreeley wrote. “There is this question, too: Would those barking loudest about Josh Renville’s rights being infringed be barking as loud if the photo in question showed a young person holding a handgun while flashing gang signs? Rights are rights, right?”

Interestingly, an informal poll conducted by Fox 31 shows about 65 percent of more than 400 voters support the Renvilles.

Charles Renville told the Daily Mail his son plans to enlist in the Guard next month.

Dahen said he scheduled a face-to-face with Renville, but doubts they can come to an agreement. The assistant superintendent is expected to make a determination on the appeal within 30 days, according to KARE 11.

Dahen is pursuing an explicit ban on firearms in the schools yearbook, he told the Daily Mail.