School principal: ‘Only terrorists we need to fear are domestic white Christian men’ 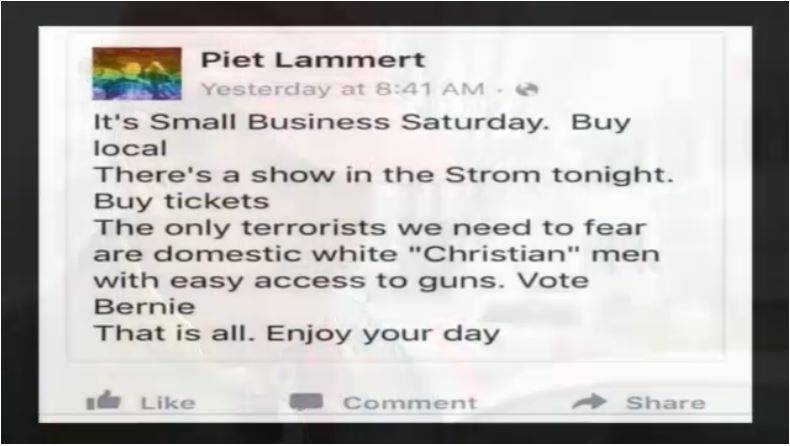 After a lone gunman killed two civilians and a police officer in Colorado Springs, Colorado, the vice principal, Piet Lammert, took to Facebook to post his thoughts the next day:

There’s a show in the Strom tonight. Buy tickets

The only terrorists we need to fear are domestic white “Christian” men with easy access to guns. Vote Bernie

That is all. Enjoy your day

“I know Piet and he’s someone who genuinely accepts all people,” Libby tells WGME. “The post does not reflect who he is as a person.”

She didn’t stop there.

“It was a mistake,” Libby says. “It was a poor choice in words and it should never have been posted.” The superintendent didn’t specific what words would have been better to say.

After it was posted, Libby said the situation “has been handled,” without giving any specifics.

“I have investigated it and I have taken appropriate action,” Libby would only say.

Lammert took to Facebook to apologize to “those I offended,” but also to attempt to explain his comments.

I am writing to take responsibility and apologize for a post that I made on my private Facebook account yesterday. I mistakenly left my setting open to “Public” and in doing so made a post that offended some members of our community and beyond. I deeply regret doing so, take full responsibility, and hope that those I offended will accept my apology.

Apparently still feeling the public blow back from his remarks, the school administrator posted another apology, saying it was “an exaggeration.”

With true humility, I write to apologize for the offensive statement that I recently posted on Facebook. I did not intend this statement literally when I wrote it–it was an exaggeration–but soon after realized that it was unintentionally hurtful, offensive, and divisive at a time when more than ever we need compassion and understanding.

In short, I did not mean what I said and wish with all my heart that I could take it back. But I need to take responsibility for it nonetheless, because I wrote it. It does not represent who I am or what I believe, but I wrote it. This post is an effort to at least begin to make amends.

Had I simply written what I meant, the post would have reflected my urgent distress at the epidemic of mass violence in our country, which more recent events have proven to span all social groups. Ironically, in my effort to point out that we run the risk of simplifying the problem by singling out a particular ethnic group, I did exactly that to the group to which I belong. It was careless and rash.

WGME attempted to contact the public employee, but Lammert reportedly ignored their requests.