GLOUCESTER COUNTY, Va. – Some state officials are displaying a willingness to fight the Obama administration’s insistence that schools provide transgender students full access to the restrooms and locker rooms of their choice, regardless of their biological gender.

The states of South Carolina, West Virginia, Arizona and Mississippi, along with the governors of North Carolina and Maine, have filed an amicus brief in a lawsuit filed on behalf of a student who was denied access to boys’ restrooms by the Gloucester County, Virginia school district, according to ThinkProgress.org.

Gavin Grimm, the student at the center of the controversy, is a biological female who has been taking hormonal treatments to give him a deeper voice and other more masculine features.

When his request to use the boys’ restrooms was denied, the American Civil Liberties Union filed a federal lawsuit on his behalf, arguing that the school district’s restroom policy violates Title IX of the U.S. Education Amendments of 1972, a federal law prohibiting sex discrimination by schools. 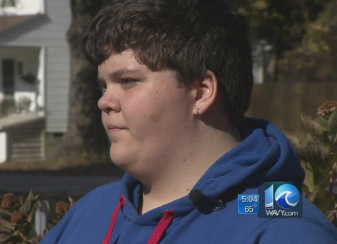 That’s the legal position taken by the U.S. Department of Education’s Office for Civil Rights, which has been trying to force schools across the nation to conform.

The ACLU asked a judge to issue an injunction allowing Grimm to use boys’ restrooms while the case is pending, according to ACLU.org. The request was denied, prompting the ACLU to seek relief the Fourth Circuit Court of Appeals.

Leaders of the six states mentioned above filed the amicus brief with the Fourth Circuit Court, in an attempt to influence the outcome of a case they believe could have national implications.

They argue that the biological facts of the case are indisputable – Grimm is a female, as defined by anatomy, and restrooms in schools have traditionally been segregated by anatomy, for reasons of modesty and privacy.

“G.G. is treated no differently from any other girl on account of biological sex. G.G. is being excluded from the boys’ bathroom not because of any stereotype about how G.G. should look, act, or dress, nor because of G.G.’s gender identity, but simply because G.G. is not of the male sex,” the legal brief argues, according to the ThinkProgress.org report.

“Regardless of gender identity, no female may use the boys’ restroom. G.G. lacks a male reproductive organ, and boys using urinals are not legally compelled to be in the presence of biological females when the boys must expose their male reproductive organs to urinate. That falls squarely within the regulatory safe harbor for single-sex bathrooms.”

Another section of the brief says “Requiring each sex to use its own restroom depends not on any inaccurate or degrading stereotypes about women’s inferiority, but on the basic biological differences between the sexes, such as boys’ exposure of their male reproductive organs to use urinals, out of the presence of females.”

The brief says the effort to allow Grimm to use boys’ restrooms “disregards the feelings of and invasion of the privacy of the many more boys who would be forced to perform intimate bodily functions in the presence and possibly view of a biological female. There is no authority for twisting equal protection to force schools to ignore the biology of urination and the privacy of adolescent boys’ reproductive organs,” the news report said.

While Grimm says that he feels humiliated and ostracized when he’s forced to use private, single stall restrooms at school, the brief filed by the states rejects that argument, according to the news report.