GREEN BAY, Wis. – Ridwaan Mohamud allegedly punched his teacher in the face because the teen is a Somali, and a homosexual joke days earlier made him really angry.

The Southwest High School 17-year-old is back in school after his arraignment on charges of substantial battery and disorderly conduct stemming from a Dec. 21 incident in which he allegedly decked his teacher in the face, breaking two facial bones, WBAY reports. 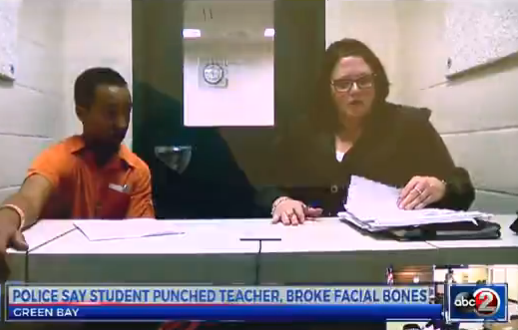 The Friday before, the teacher counseled Mohamud about being bullied at school and told the student “I would date you” as a joking way to assure the teen he wasn’t ugly, according to the Green Bay Press-Gazette.

Mohamud was apparently offended by the comment and spoke with the school principal, Jeff Vanlannen, the same day. Vanlannen allegedly told Mohamud the teacher wasn’t coming on to him, but it apparently wasn’t enough.

“Mohamud’s mother told school authorities and police that she had tried to talk Mohamud out of being angry over the weekend, the complaint says. Mohamud entered the teacher’s first-hour class Monday, called out his name, then approached and punched him in the face, the complaint says,” according to the Press-Gazette.

“Witnesses who intervened said the teacher made no effort to defend himself, the complaint says.”

Mohamud was charged with the two felonies as an adult in Brown County Circuit Court and faces up to 3 ½ years in prison, if convicted.

Mohamud’s family blames school officials for their son’s predicament, because they didn’t take action to prevent the alleged attack. District officials refused to discuss the case.

Several folks who commented online believe the student’s excuses for his actions are lame, and he should be held accountable.

“Interesting how this story is already being twisted to somehow be the fault of the teacher. Unbelievable,” Ken Netzel posted. “If a 17 year old does not know that it is unacceptable to strike a teacher then it points to a bigger parenting failure.”

“When are you and all the people of your generation going to get it through your heads that life isn’t fair?” Lisa Keveloh posted. “People are offensive for any given reason, if you look hard enough, doesn’t give the green light to break someone’s face!”

Others speculated about and debated his faith. Several people who appeared to be family members wore hijabs to Mohamud’s arraignment.

“I personally knew the kid in question and he is relatively good mannered and behaved kid. He just made one mistake and it got the best of him,” Erin countered.

“It really is saddening because you would never expect this from him. What’s even worse is everybody is making accusations saying he is Muslim (they have no clue) and he is somewhat radical at that. People have no clue who he is and yet they are going crazy,” Erin wrote.