CHICAGO – The Chicago Teachers Union is recruiting high school teachers to goad students into protesting for the union’s self-interests through a workshop this weekend. 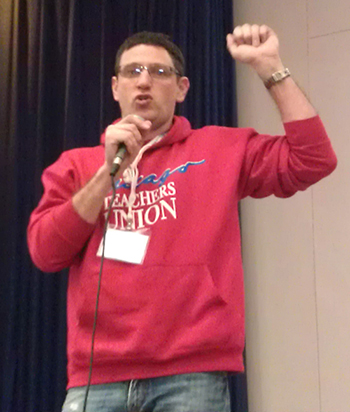 The CTU workshop “Teachers Empowering Students for Social Change” is scheduled for 10 a.m. until noon Saturday to help teachers learn the best ways to convince their students to take action for the union’s causes.

A Wednesday email endorsed by the CTU and sent by Teachers for Social Justice – a far-left radical faction of Chicago teachers – encourages teachers to attend if they want to “empower” students to “express purposeful dissent,” or “engage in civic action to bring about desired social change,” or “become involved in solutions to CPS’ teaching and learning problems.”

In essence, the union is calling on teachers to learn how to recruit students to protest on its behalf because, as the CTU wants the public to believe, “teacher issues are student issues!” according to the event flyer.

The recruitment drive comes just weeks after the CTU took a vote of its members to authorized a possible teachers strike, which they supposedly overwhelmingly approved. The vote was in response to contract negotiations between the CTU and Chicago Public Schools that have dragged on since last summer.

The negotiations are complicated by the fact that CPS is about a half-billion dollars in debt, teetering on financial disaster, and begging for money from the Democrat-controlled General Assembly, which is locked in a standoff with Republican Gov. Bruce Rauner over the state budget.

The district’s financial problems are centered on teacher pension costs, and the city of Chicago pays both the teacher’s and employer’s contribution to the system. But CTU President Karen Lewis recently signaled the union may be willing to give up the perk, and ask teachers to pay their own share, the Chicago Tribune reports.

At a speech Tuesday at Northeastern Illinois University, Lewis told attendees at the Martin Luther King Jr. event CTU members may have to “lose certain things” in the current round of contract negotiations.

MORE NEWS: Minneapolis school board to vote on expelling police from schools

“I think that people understand the dire straits that CPS is in and that we are willing to make certain sacrifices,” she said, according to the Tribune.

Lewis also laughed off a proposal by Rauner to exert state control over Chicago schools and make the district eligible for bankruptcy, mostly because Democrats in the General Assembly will never go for it.

“First of all, it’s not going to happen,” she said. “A, he’s delusional. B, I would say he’s crazy, nut you all always cut the good stuff I say about him.”

The Tribune notes that Lewis called the pension perk a “strike-worthy” issue in the past, but seemed to walk back rhetoric Tuesday.

“People always worry about that strike – that’s what happens when you don’t get to an agreement. So at this point that’s not the way things are looking but I’m not going to rule it out either,” Lewis said.

Lewis seemed optimistic the two sides will reach a deal.

“We are working on trying to deal with the noneconomic things so that we can find together a package that works for our members,” Lewis said.

There is one issue, however, the union president said CTU absolutely will not negotiate: automatic, annual “step” pay raises she calls the “bedrock of our professionalism.”