DAYTON, Nev. – Nevada parents are outraged over a racially charged image handed out to students as part of a writing assignment.

The image, a painting titled “A Tale of Two Hoodies” by Michael D’Antuono, depicts a police officer in a Klu Klux Klan hood with two hands on a gun pointed at a black child in a hooded sweatshirt, who is in turn offering the police officer a bag of candy, My News 4 reports. 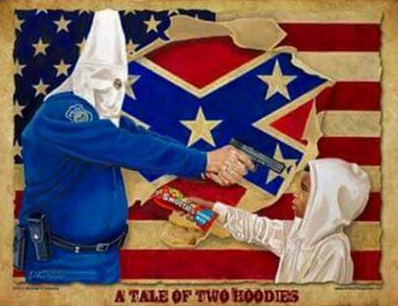 In the background, the American flag is blown out to reveal a Confederate battle flag underneath.

Lyon County School Superintendent Wayne Workman told the news site students in a social studies class at Dayton High School were given the image as a writing prompt, and apologized to parents for its use.

“I think it was meant to be a prompt for a writing assignment in a social studies class,” he said. “The first thing we hope to say to parents is we hope they will accept our sincerest apology for the offensive nature of the picture.”

“The message in there is in no way consistent with our views in regards to law enforcement,” he said.

Workman said he believes the teacher used the image to provoke students into making an argument about racial profiling, but concedes other avenues would have been more appropriate.

“Still, the question is could that have been accomplished in a different manner and still receive the same result?” Workman questioned. “Yeah, I think it could have.”

In Dayton, Alyssa Marie posted a photo of “A Tale of Two Hoodies” on Facebook and tagged KRNV News 4.

“This photo was handed out to students at Dayton HS, here in Northern Nevada as part of their first semester finals!” Marie posted. “They were instructed to draw parallels between the picture and our nation’s slavery past. Their admin is out of control!!!”

“Lyon County School District and Dayton High School Administration would like to offer up our sincerest apology for the picture that was used by a classroom teacher at Dayton High School. We understand the offensive nature of the image and regret that it was used,” the statement read.

“We are addressing the issue and appreciate the public’s patience and understanding as we deal with this matter. The district has worked diligently to form a positive working relationship with local law enforcement and first responders,” it continued. “Lyon County School District staff and students greatly respect the work and service provided by all law enforcement in keeping our schools and communities safe.”