WASHINGTON, D.C. – A recent survey shows public school teachers are more likely to send their children to private school than most parents, and those teachers generally support school choice and avoid their union.

“Public school teachers are much more likely to use a private school than are other parents. No less than 20 percent of teachers with school age children, but only 13 percent of non-teachers, have sent one or more of their children to private school,” Education Next reports. “Teachers are also just as likely to make use of a charter school or to homeschool their child as other parents.”

Overall, about 30 percent of public school teachers utilize an alternative – charter, private or homeschool – to their own employer for their children’s education, the obvious implication being that those in the know understand public schools offer an inferior product. 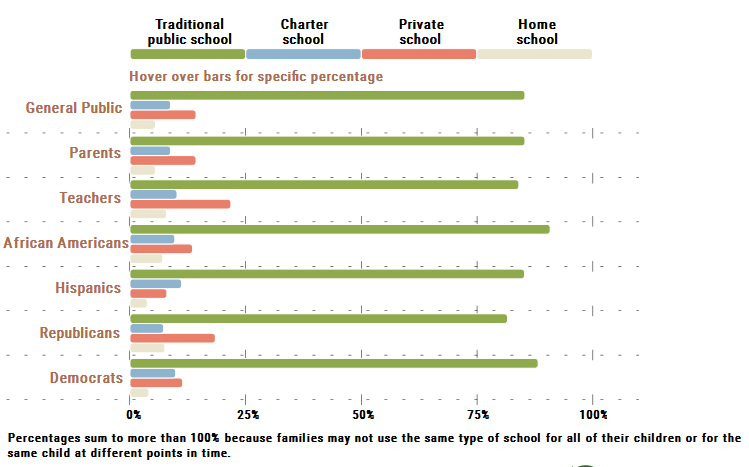 “One expects employees to be loyal to the employer who sends them a regular paycheck, especially if the product being produced is of high quality,” according to the education journal. “How many Apple employees are using a Samsung? How many Yankee employees root for the Mets?”

The national survey was conducted in June 2015 by Knowledge Networks and Education Next and involved 4,000 adults – 851 parents of school aged children, 206 of which are public school teachers.

The findings lend context to the current U.S. Supreme Court case of Friedrichs v. California Teachers Association over forced union dues, otherwise known as agency fees, that teachers are forced to pay to their union whether they’re members or not.

Education Next points out the CTA argues “’Teachers do not support school voucher programs, because they hurt students and schools by draining scarce resources away from public education.’

“But the facts on the ground tell a different story.”

“School vouchers are more controversial, but even in this case 42 percent of the alternative-choosing teachers back vouchers, as compared to only 23 percent of the teachers who send their children only to public schools,” according to the education journal.