GRAND PRARIE, Texas – A Texas father’s bizarre years-long troubles with the law finally came to an end this week when a Dallas judge dismissed allegations he stole his daughter’s cell phone in 2013.

Ronald Jackson told CBS DFW he confiscated his then 12-year-old daughter’s cell phone in 2013 after discovering a rude text comments the girl made about another person. 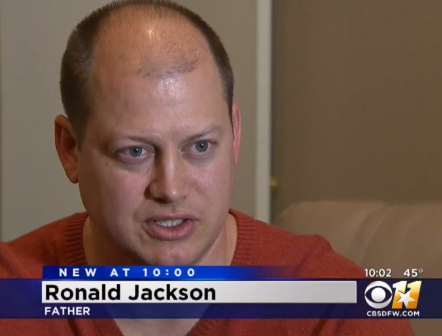 “I was being a parent. You know, a child does something wrong, you teach them what’s right,” he said. “You tell them what they did was wrong and you give them a punishment to show that they shouldn’t be doing that.”

Jackson’s daughter’s mother is married to an officer with the Grand Prairie Police, and before he knew it officers were knocking at his door at 2 a.m., demanding that he turn over the iPhone 4.

“At that point, I decided the police don’t interfere with my ability to parent my daughter,” Jackson told WFAA.

“As a mom, I’m upset because – number one – the property belongs to me,” said the girl’s mother, Michelle Steppe. “You can’t take someone’s property, regardless if you’re a parent or not.”

WFAA reports Steppe and Jackson were never married. Steppe said Jackson was not in his daughter’s life until she was seven years old.

Jackson was later charged with a Class C misdemeanor for theft less than $50, but the Dallas County District Attorney’s office filed a more serious Class B misdemeanor when Jackson declined a proposed plea agreement to return the phone, according to the news site.

He was arrested at his home in the middle of the night – around 2 a.m.

The new charge carried a potential six months in jail and a $2,000 fine, but Dallas County Criminal Court Judge Lisa Green ordered a jury to find Jackson not guilty Wednesday after a two-day trial at which she claims the state failed to present enough evidence to support the charge.

Jackson’s daughter testified about the ordeal at the trial, an experience that ruined their relationship and any chances of reconciliation, the father told the news site.

“I have to separate myself from them,” he said. “I can’t ever have a relationship with them again.”

He reportedly still has the phone. He told CBS DFW that “justice” finally prevailed.

Steppe, meanwhile, is seething about the verdict.

“Even if you purchase something with your own money and have a receipt, it’s not yours,” she said of lessons learned. “Someone can take it from you.”