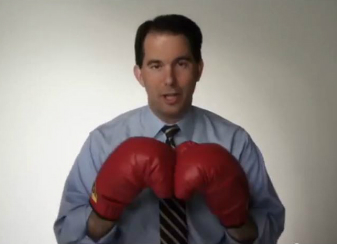 As WiscNews.com put it, “The bill that later became Act 10 launched the largest protests ever in Madison, including a temporary occupation of the Capitol; legislative chaos highlighted by Democratic senators fleeing to Illinois to forestall a floor vote; and Walker’s historic recall victory.

“The days, weeks and months after Walker’s Feb. 11, 2011, announcement were among the most dramatic in Wisconsin’s history.”

The emotional protests left many across the state and nation with the impression that Walker and legislative Republicans had somehow imposed a terrible injustice on public sector employees and their families.

But the fact is that unchecked collective bargaining was bleeding massive resources from units of government at all levels. And overburdened taxpayers were picking up the tab.

The worst part was that taxpayers had no way to defend their wallets from constantly increasing labor costs. Public sector unions bullied employers behind closed doors, and the resulting contracts almost always increased costs for schools and municipalities, whether they could afford it or not.

Those extra costs inevitably found their way to the working people of Wisconsin.

Act 10, signed into law on March 11, 2011, limited the ability of public sector unions to plunder their employers’ bank accounts every two or three years, when contract time came around again. Unions were limited to negotiating for salary increases alone, and the percentage of those increases was capped. The levels of other compensation, like insurance and other benefits, were left to the discretion of the people elected to run local units of government.

A good example is health insurance for public school employees. The Wisconsin Education Association Council, the state’s largest teachers union, had managed to force school boards in hundreds of districts to purchase coverage exclusively from WEA Trust, a carrier closely associated with the union. As a result, insurance rates went through the roof.

Act 10 ended this practice and opened the school insurance market up to competitive bidding, leading to huge savings for local schools.

Taxpayers have benefited immensely from the savings provided by Act 10. Not only are their schools and local governments free to invest more dollars in direct services, but their tax burden has been relieved. Very much so.

According to the MacIver Institute, a Madison-based government research center, Wisconsin governments have saved a total of $5.24 billion in the five years since Act 10 was signed into law on March 11, 2011. More than $2 billion has been provided in direct relief to taxpayers.

School districts and municipalities across the board, big and small, have saved massive amounts of money.

Milwaukee Public Schools, where there are few fans of Gov. Walker or Act 10, used the law to save $1.3 billion in long-term pension liabilities, according to the MacIver report. The University of Wisconsin system saved $527 million in retirement costs.

On the smaller end of the spectrum, the Neenah school district saved $97 million in long-tern pension liabilities, the report said. And the list goes on and on.

Who says government can’t do more for less, when it doesn’t have to operate at the mercy of large, bullying labor organizations.

Analysts in other states have taken notice, including the Illinois Policy Institute, which published a salute to Act 10 while lamenting the continuation of high labor costs its own state:

“Our recent report on Wisconsin shows that revamping the state’s labor law has allowed state and local governments to operate far more efficiently, meaning that local officials have been able to offer relief to taxpayers without major cutbacks in government services. “The state’s budget has gone from a $2 billion deficit to a $1 billion surplus. The state legislature in Madison is close to passing a $500 million tax-cut package. And even the most ardently pro-union workers should be able to take some measure of comfort from the fact that all this was accomplished with few government employee layoffs.

The MacIver Institute has declared Feb. 11 to March 11 “Taxpayer Appreciation Month,” in honor of Act 10.

“We owe Gov. Walker and all of the courageous legislators who voted for Act 10 a big thank you,” said Brett Healy, president of the MacIver Institute. “Gov. Walker has reduced the cost of government in Wisconsin by more than $5 billion – it is the gift that will keep on giving back to taxpayers long into the future.”