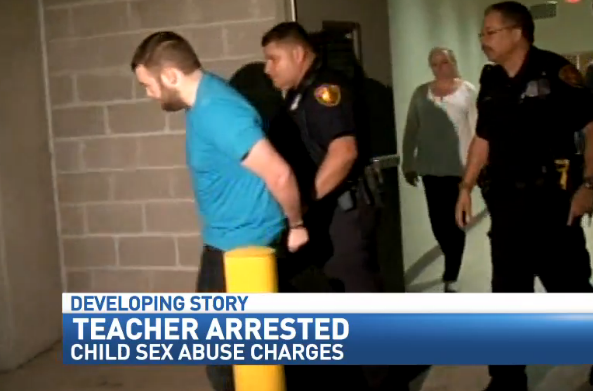 San Antonio police arrested 28-year-old Jared Anderson early Thursday on two counts of sexual performance with a child and one count of indecency with a child after several teen boys from his church reported abuse to church officials KSAT reports.

“He’s having parties where he’s encouraging these kids to strip naked, to perform sex acts on each other, sometimes on him,” Salame told KENS, “sometimes taking photographs, very graphic, disgusting sexual things going on.”

Two boys who attended a Feb. 12 Bros Night – one of multiple church parties at Anderson’s home in recent months – went with their fathers to a police station a month later to detail the experience in a police report. Salame told KSAT the original abuse report was made by a boy to church officials, who contacted Child Protective Services.

“Officer Garcia spoke to the parents and the complainants separately and was told by Complainant 2 that he went to the Defendant’s residence with other juvenile males and participated in some dares suggest by the Defendant,” according to the arrest affidavit cited by Fox 29.

“One of the dares directed by the Defendant was that Complainant 2 had to place his genitals onto the Defendant’s mouth while everyone was naked and present. Other similar acts involved sitting on another male’s lap for 30 seconds,” it continued.

“Complainant 1, a 15 year old male, stated that he had to hold another boy’s genitals, sit on a boy’s lap, wrestle, and hug the defendant while being naked.”

The boys told police that when they arrived at the party there was a note instructing them to strip naked, and the last one to do so would get the first dare. Police also searched Anderson’s home, but would not reveal what, if anything, they recovered.

Judson’s church issued a statement about his arrest.

“The Church of Jesus Christ of Latter-day Saints has zero tolerance for abuse of any kind. When we learned of the situation, local leaders reported it immediately to law enforcement. Anderson has been removed from all responsibilities within the local congregation,” it read.

“The Church is supportive of the efforts of authorities to investigate and prosecute this matter.”

The Judson Independent School District put Anderson on administrative leave and issued a statement, as well.

“Judson High School teacher Jared Anderson has been put on administrative leave pending the results of an investigation being conducted by San Antonio Police of allegations of sexual misconduct. Mr. Anderson has been employed by JISD for two and a half years as an English teacher.

“Judson ISD is obviously very concerned about these charges and will fully cooperate with the ongoing investigation by SAPD, but will let the legal process take its course. … Judson ISD conducted a multi-layered screening process with every potential employee that checks for any and all felony or misdemeanor charges.”

Police told KENS none of the victims identified so far appear to be from Judson ISD, but stressed they’re likely to uncover new victims, and file additional charges, as the investigation continues.  A preliminary report states Anderson confessed when confronted by police, and parents of his alleged victims provided police with text message and voicemail apologies that Anderson sent them, KSAT reports.