TINTON FALLS, N.J. – A New Jersey mother is demanding answers on how antidepressants got into her daughter cereal at Swimming River Elementary School, and why officials dragged their feet to investigate.

Calvette Dixon told the Ashbury Park Press school officials were reluctant to investigate how prescription pills made their way into her 11-year-old daughter Jaciyah’s cereal at the school last Wednesday. 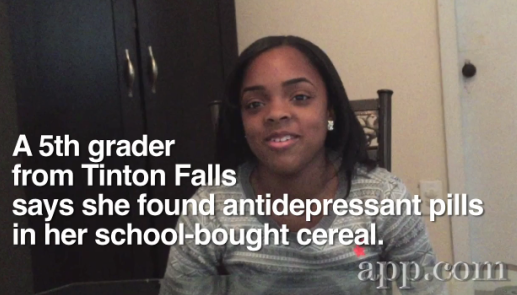 She said Jaciyah was eating an individual prepackaged cereal Wednesday morning and got up to throw away the wrapper. When she returned, she found two pills – what was later determined to be two 60 mg doses of antidepressant Cymbalta – in the bowl, one on top and the other towards the bottom, according to the news site.

Another student alerted a teacher, who allegedly put the pills back in the box and told Jaciyah to return it to the cafeteria, which she did. A cafeteria worker gave another serving of cereal, but she decided not to eat it.

Dixon said the vice principal called her three hours after the incident, prompting the nurse mother to head to the school.

“It didn’t sound right,” she told the Press. “Why didn’t they call police?”

Tinton Falls police Capt. David Scrivanic and district superintendent John Russo both insist school officials contacted police, but neither would divulge when the contact was made.

After meeting with school officials, they initially refused to contact police, Dixon said, but by the time she arrived the police station to report the incident herself, school officials had already called.

Dixon contends police didn’t collect the pills from the school to investigate for two days, though Scrivanic told the press they were collected “immediately.” He said officers also contacted the Monmouth County Prosecutor’s Office as well as the cereal manufacturer, according to the news site.

“I felt completely disrespected, and I felt like there was no regard for my daughter,” Dixon told the Press. “I don’t feel like they were prepared or wanting to proceed.”

She believes school and police officials didn’t take her concerns seriously until after she contacted the Press.

“When the detective told me what it was, 60 mg of Cymbalta and there were two pills in it, and Cymbalta is a depression medication mixed with a pain medication,” Dixon said. “That would have caused some serious harm for her, and to me, nobody took it serous.”

“The only person who was expressing concern was me,” she said.

Russo confirmed that Jaciyah’s teacher asked the student to walk the contaminated cereal back to the cafeteria. Russo believes staff did the right thing, but said the “the speed at which it happened, we are going to evaluate to determine if it should have happened any quicker.”

“Any time there is a scenario when there are prescription drugs or any other drug in our schools that we are not aware of, we always want to take into account the safety of our children and then make sure we are addressing that as quickly and appropriately as possible,” he told the Press.