SALT LAKE CITY – In 2013, critics of the Utah legislature claimed the state was failing to “adequately fund schools.” 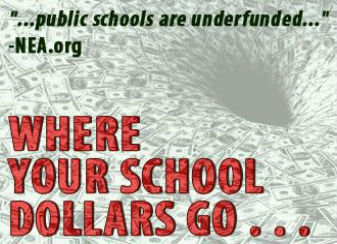 They were speaking specifically of the Salt Lake City school district, which was apparently in a financial pickle at the time.

But the accusation is hard to believe, considering the top end of the school district’s payroll that year.

Perhaps the problem had less to do with the amount of money the state provides, and more to do with how the district chose to spend it.

The action was taken to raise about $3.6 million in new revenue.

Part of the reason the board managed to impose the tax without a public outcry was the relatively small size of the tax increase.

As one mother was quoted as saying by the Deseret News, her family was willing to give up pizza night once a year to pay the extra taxes.

Beyond that, school officials had apparently managed to convince the public that they weren’t getting adequate funding from the state to properly instruct students.

“They’re satisfied that Utah is on the bottom of the heap in per ­student expenditures,” the same mother was quoted as saying. “It’s a disgrace, and everyone in this room should hold the Legislature responsible for their lack of concern for our children.”

But did that mother and her fellow residents know how much the Salt Lake City district was paying its top employees?

If the district was really desperate for $3.6 million in new revenue back in 2013, it could have taken $10,000 from each of the 327 six-figure salaries and come very close to its goal. Or perhaps those near the top of the chart could have sacrificed a bit more and the rest a bit less.

Some would argue that the highly-paid staff deserves every penny because its preparing Salt Lake City’s youth for the future.

But just how effective have they been? Put it this way – if Salt Lake City paid by level of performance, a lot of professional employees would be making less.

On its 2015 state report card, the Salt Lake City school district lagged behind the rest of the state in student proficiency in most areas.

24 out of 27 categories for English, math, reading and various forms of science, the percentage of Salt Lake City students scoring proficient lagged behind the state average.

In eight categories, in fact, the percentage of difference between Salt Lake City and the state was double digits. In earth science, the district lagged a full 29 percent behind the rest of the state. In physics the difference was 27 percent and in chemistry it was 21 percent.

Before they scream about the amount of money their schools get from the state, perhaps Salt Lake City residents should inspect their own district payroll, and ask themselves if the highest-paid employees have really earned what they’re making.