Teacher forced to resign after student steals, shares nude pics from her phone

UNION, S.C. – A student stole teacher Leigh Anne Arthur’s cell phone, found a nude picture on the device, then sent the image to other students through text messages and social media.

The situation prompted school officials to take action — against the teacher — by giving Arthur an ultimatum: either resign or the district will initiate the termination process, Union County schools superintendent David Eubanks told The State. 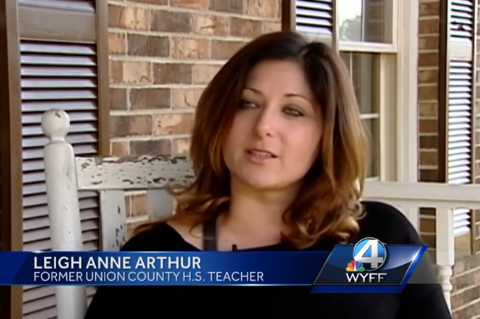 “I think we have a right to privacy, but when we take inappropriate information or pictures, we had best make sure it remains private,” he said. “Students had access to very inappropriate pictures of a teacher.”

Arthur, a “mechatronics” teacher at the Union County Career and Technical Center, resigned last week, district director of personnel Jeff Stribble confirmed in an email to The State.

School officials are they’re unsure how many students viewed the teacher’s nude picture, but Eubanks said Arthur’s phone was unlocked when it was swiped. Arthur filed a complaint about the theft with the Union Public Safety Department.

Arthur told WYFF she took the partially nude pictures for her husband for Valentine’s Day, and doesn’t think she should be held responsible for the theft, which occurred while she was patrolling the halls.

“He took pictures from my phone and sent them from his phone,” Arthur said.

Regardless, Arthur said she already forgives the student for the prank.

Three of Arthur’s students – Jacob Barnett, Josh Sinclair, and Matthew Caldwell – don’t believe their teacher deserves to lose her job over the pictures, and started an iPetition to gather signatures to call for her reinstatement.

“After being escorted off of school property, we (the students) are left to believe that she has been forced to, or given little choice but to resign,” the petition read. “Mrs. Arthur has not only shown tremendous dedication to her students, but also the mechatronics program itself, often reaching out to local businesses and colleges to get materials that would not normally be available for class.

“With that being said, the student(s) responsible have not received any sort of punishment,” it continues. “The circumstances in which Mrs. Arthur was let go is unacceptable, and must be corrected.”

The petition had 235 signatures as of Tuesday morning.

“The teacher is being punished, (but) it’s the student who needs to be punished,” Jeanie Belue wrote in the petition comments. “If they don’t give her job back she needs to sue UCHS!”

“Bring Mrs. Arthur back!” Niroshia added. “She doesn’t deserve for her career to be destroyed over an invasion of her own privacy!”

“Leigh Anne is a phenomenal teacher and is yet another in the line of good educators this district has mistreated,” Janae OShields posted. “Do the right thing, Union.”

Eubanks told The State he’s “unsure” if the student who stole Arthur’s phone and distributed the personal images will face disciplinary action.