ST. PAUL, Minn. – A teacher who dared to criticize the lack of student discipline in the St. Paul school district, and the adults who encourage it, has been placed on leave after a Black Lives Matter group threatened to “shut down” his school. 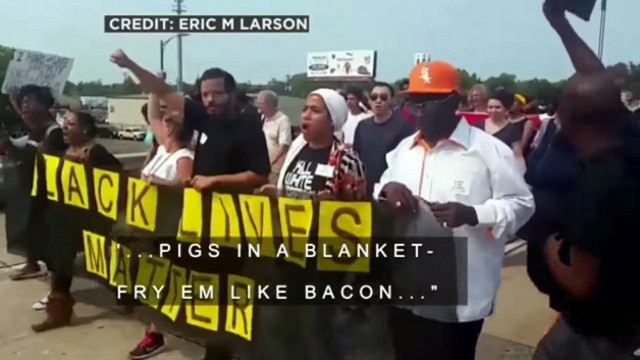 Meanwhile, a teacher in the same school was hospitalized after being attacked by several students on Wednesday.

Numerous teachers have been physically attacked in the St. Paul district over the past few years.

Many observers say the general lack of student discipline is the result of a district effort to greatly reduce the rate of out-of-school suspensions for black students, who were disproportionally subject to such punishments.

Suspensions have been replaced by other strategies, like short time-outs and “restorative justice” tactics that do not involve any sort of punishment, according to several sources.

Many say the non-punitive approach can be tied to the influence of the Pacific Educational Group (PEG), a San Francisco-based consulting firm that contracts with St. Paul Schools.

PEG officials believe the American education system is unfairly based on white cultural norms (white privilege), to the detriment of black and other minority students.

Many teachers in the district have spoken out about the violence and lack of discipline, including Theodore Olson, a special education teacher at St. Paul’s Como Park High School.

He recently used a social media post to confront those who blame educators for the high rate of crime among minority students.

“Anyone care to explain to me the school-to-prison pipeline my colleagues and I have somehow started, or perpetuated, or not done enough to interrupt?” Olson wrote on Facebook. “Because if you can’t prove it, and campaigns you’ve waged to deconstruct adult authority in my building by enabling student misconduct, you seriously owe us real teachers an apology. Actually, an apology won’t cut it.”

That message did not sit well with Black Lives Matter St. Paul. The group’s leader, Rashad Turner, threatened to “shut down” Como Park High School over Olson’s comment, according to the St. Paul Pioneer Press.

Olson was placed on indefinite paid leave by the district on Wednesday, the Pioneer Press reported. The district did not provide a reason for the leave.

But it seems safe to assume that the leave has something to do with a Monday meeting between St. Paul school Superintendent Valeria Silva and members of Black Lives Matter.

While details of that meeting have not been disclosed, Silva described the conversation as “productive and positive,” according to the Pioneer Press.

After Olson was placed on leave, Turner called the move a “great first step.”

While Olson was being placed on leave, an unidentified teacher at Como Park High School was attacked by two students and hospitalized Wednesday.

“School officials offered few details of the Wednesday incident at Como Park Senior High School, beyond a confirmation that the serious altercation occurred and was being investigated,” the Pioneer Press reported.

“Police officials, however, said officers were called on a report of a fight at the school sometime in the afternoon, but it was over by the time they arrived.

“Police said two male students had assaulted a male teacher, in a fight that began in a classroom but spilled into a hallway.

“The teacher was taken to Regions Hospital by school staff, a police spokesman said. It was unclear what his condition was, but he was alert enough to give a statement.”

The alleged assault was the latest in a string of violent incidents in the St. Paul school district this year.

In one week in October, several teachers were injured when trying to stop an outbreak of fights between students, a student was found with a gun in his backpack, and a student was tased by a school resource officer after disrupting a classroom and repeatedly refusing to leave.

In December, a 16-year-old student assaulted and severely injured a high school teacher who was trying to break up a fight. The teacher has since filed a lawsuit against the district, claiming it failed to provide a secure environment.

In January a former St. Paul middle school teacher also filed a lawsuit against the district, claiming she was “punched, kicked and kneed by students on several occasions and endured regular verbal harassment that was vulgar and sexual in nature,” according to TwinCities.com.

One St. Paul teacher was recently quoted across the nation after she anonymously told a St. Paul columnist that “we’re afraid.”