WWAY reports several students put a Confederate flag on display in a courtyard at West Brunswick High School last Wednesday, before a student took it down and another donned it as a cape.

The caped crusader then reportedly marched through the school cafeteria and back into the courtyard while shouting “white power,” according to Fox 8. 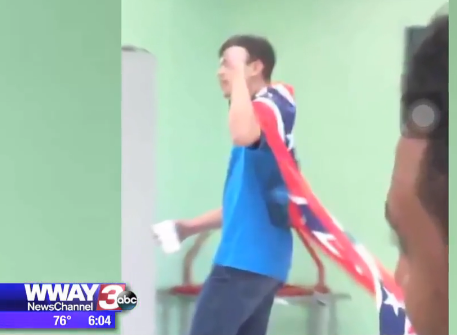 Student Courtney Gore took pictures of the incident, which allegedly involved multiple students, and posted them with a message to Facebook the same day. The post quickly went viral, racking up about 1,200 “shares” in less than a week.

“WEAR ALL BLACK!” Gore wrote. “Today the black community at West Brunswick was offended by some racist students. A group of students hunt the confederate flag in the court yard. When another student took it down the boy wore it on his back and waked around the cafeteria.

“He walked back out to the outside eating area and screamed ‘white power’ several times. This same group of students have been seen stepping on chocolate milk cartons saying ‘white power’ repeatedly,” the post continued.

“Help to let the administration of WBHS know that this is not ok, and the students of WBHS will not tolerate it.”

Three students were issued criminal summons for disorderly conduct as a result of the flag debacle, and two other juvenile students involved were not charged, ABC 11 reports.

Brunswick County Schools spokeswoman Jessica Swencki told WWAY the students’ criminal charges do not represent a district position on the Confederate flag, but rather stem from a disruption to the school’s learning environment.

Brunswick County NAACP President Bernest Hewett told the news site the incident “shows the school system that maybe there needs to be some changes made” but did not elaborate.

News reports do not detail why the school district pursued criminal charges against the students, rather than issuing a school-specific penalty.

On Thursday, school officials discussed the racist incident with students, many of which wore black to condemn the stunt.

The students’ criminal charges generated a heated, racially charged debate online, most of which is unfit for publication. While most agreed the students’ antics were insensitive and inappropriate, not everyone agreed the situation warranted disorderly conduct charges.

“Thanks to all our law enforcement of Brunswick County for keeping us people safe from the flag,” commenter “American” posted to ABC 11.

“Thank goodness people are being arrested for wearing a cape,” Rob H wrote.

“This will look really impressive on a job resume or college application,” Oceanwalk posted to WWAY. “Stupid times three.”

WWAY commenter Michael Herring contends one of the recent student arrests involved a black student who offered a racist chant in retaliation to the “white power” incident, a fact confirmed in a follow up news report.

“West Brunswick had the same issue again for the second day in a row but this time the female student stood up and raised her hand in a salute to black power,” Herring wrote. “She was immediately removed in hand cuffs. The school needs to be firm in its punishments for all these kids. Their actions are not consistent and they need to stop this immediately.”