MADISON, Wis. – Gaining tenure in the University of Wisconsin system has traditionally been tantamount to gaining a lifetime contract, regardless of performance.

A recently repealed state law said “tenure can only be revoked and faculty fired if they commit ‘egregious acts’ such as criminal activity or sexual harassment, which is extremely rare,” according to the Wisconsin Policy Research Institute (WPRI). “And even in those cases, a hearing is required – and lawsuits frequently ensue.”

Such a policy, of course, provided little incentive for highly-compensated, tenured professors to put forth their best effort. It’s fair to guess that many did so out of a personal sense of professionalism, while others probably did not.

The point is that they didn’t have to do their best, because it wasn’t required.

Last year the Republican-led Wisconsin legislature set aside that tired old system and called for a new state university tenure policy. Lawmakers ceded their right to create tenure policy and handed it back to the University of Wisconsin Board of Regents, a 16-member board with 14 members appointed by the governor.

That board is expected to vote on a proposed new tenure policy on Thursday.

The issue is that the proposed new policy was drafted by a Tenure Policy Task Force, which was appointed by the Board of Regents. That 21-member committee consists of three university chancellors, two vice chancellors, and – incredibly – more than a dozen professors or associate/assistant professors – the very people who benefit most from tenure protection.

Not surprisingly, the task force put forth a set of recommendations that do not significantly alter the current system.

For instance, it calls for tenured professors to be labeled in terms of effectiveness during their periodic reviews, but stopped short of demanding a definition of how their effectiveness should be defined.

The task force would only allow layoffs of tenured professors during periods of financial emergency, or if their programs are completely eliminated, rather than give university officials the ability to shape their faculty based on changing student needs.

The task force also defended a state law that establishes seniority as the major criteria when determining what professors should be laid off. 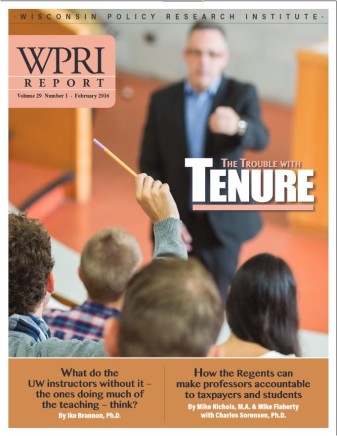 WPRI recently checked into the debate with its own report, The Trouble with Tenure, which has gained media attention throughout the state. The report calls on the Board of Regents to reject many of the self-serving recommendations of the Tenure Policy Task Force, and adopt a policy that best serves the students and citizens of Wisconsin.

“There is clearly immense pressure on the regents from tenured and tenure-track faculty to keep longtime tenure guarantees in essentially the same form they have been for decades,” the WPRI report says.

“However, adopting a tenure policy that does not assure taxpayers and legislators that the regents are serious about holding faculty accountable, does not give chancellors the latitude to nimbly align their campuses with the needs of students and the marketplace, and does not recognize that higher education will invariably undergo immense change and reform in the coming decades, will not serve the long-term interests of either highly-valued professors or the rest of the Badger State.”

The report recommends that the Board of Regents look closely and critically at the use of tenured faculty in Wisconsin universities, and force the schools to rationalize the practice.

“(Policy should) direct chancellors to clearly articulate to the Board of Regents, each time a person is considered for tenure, why the department and university will benefit from having a tenured employee rather than a member of the instructional staff operating on a contract,” the WPRI report says.

“Specific reference should be made to the mission of the university, and how the department and candidate are expected to contribute to the various facets of the mission.”

Here’s a quick look at a few of the major issues addressed in the WPRI report:

Professors in the UW system must apply for and be granted tenure after six years of employment, or move on, according to the WPRI report.

The problem, according to the report, is that there is no uniform set of standards to dictate whether a professor should be granted tenure. Professors are recommended for tenure by their departmental peers, and are generally rubber-stamped by higher powers.

That does nothing to increase the probability that only effective professors are granted tenure.

“… Every department on every campus in the 26-campus system can have different criteria for evaluating candidates and granting tenure. Even the terminology can vary among campuses,” the WPRI report said.

“From an external point of view – say the view from lawmakers at the Capitol – it’s nearly impossible to follow and evaluate the effectiveness of the tenure-granting process. Not only does evaluation criteria vary widely, there is little or no data to show how often department committees deny a candidates’ application for tenure, not any data on how often those personnel committees’ decisions are overruled by a chancellor or by the Board of Regents.

“Critics who charge that the tenure granting system is dysfunctional note only that the rate of promotion to full tenure is extremely high, suggesting that the process is in-bred among faculty – or at least not very critical.”

One expert estimated that “90 to 95” percent of tenure candidates gain approval, the report said.

Does that mean that almost all applicants are outstanding educators and/or researchers? Or does it mean that they meet the social/political standards of their colleagues, who may or may not consider practical teaching or research skills necessary prerequisites?

The WPRI report says the Board of Regents should require detailed annual reports with data from each campus about the tenure application process, to help determine its effectiveness.

It also recommends that “Departments should publicly post their criteria for granting tenure and how that criteria conforms to the institution’s mission.”

Under law, tenured professors are supposed by have a “post-tenure” review every five years, according to the report.

But how tough is that review? Are tenured professors held accountable for their performance?

“Just as there is no data to determine who is granted or denied tenure (or why), there is also no data to support the effectiveness of annual evaluations and post-tenure reviews of professors as management tools for departments, deans and chancellors,’ the report said.

“The evaluation criteria … vary widely among departments and campuses and the deadlines are soft. There is no data to show whether – or how many – faculty members are ever terminated as a result of their post-tenure review.”

One expert quoted in the report said that very few faculty members are fired due to post-tenure reviews.

Even if a tenured professor is removed due to incompetence, that doesn’t mean the decision will stick.

“Tenure protections include a vigorous and complicated appeal and hearing process that makes firing even a non-performing professor difficult should the faculty member choose to fight termination,” the report said.

“The process is so expensive and problematic, many chancellors confess privately, that when faced with confronting underperforming faculty, they frequently choose the path of least resistance, retaining the professor and managing around them the best they can.”

The Tenure Policy Task Force has recommended that professors going through post-tenure review should be labeled one of three ways – “exceeds expecatations,” “meets expectations,” or “does not meet expectations.”

The WPRI report argues that those expectations must be defined, to determine what sort of performance is being demanded of professors.

The report recommends that the Board of Regents “direct individual campuses and departments to adopt a strong post-tenure review process with a clear and defined expectation.”

The WPRI report also calls on the Board of Regents to go beyond a recommendation from the Tenure Policy Task Force, which only wants to allow layoffs for tenured professors in the event of financial emergency or program cancellation.

It says college chancellors should be given power to lay off tenured staff in more circumstances, including the “curtailment, modification or redirection of a program.”

“Moving forward, chancellors, past and present regents, and most faculty are acutely aware that universities are changing dramatically in the face of distance learning technologies (and competition) and the rapidly changing needs of today’s students – and tomorrow’s,” the report said.

“That almost certainly means new ways of teaching, new programs. Programs are already being redirected or modified rather than discontinued, and if schools are to become more nimble and responsive, chancellors need the ability to lay off faculty even when eliminating an entire program is not warranted.”

Meanwhile, Wisconsin state law still requires that university staff layoffs “would normally follow seniority unless a clear and convincing case is made that program or budget needs dictate other considerations, such as the need to maintain diversity of specialization within departments.”

But the WPRI report does not agree.

“Retaining faculty simply because they have been on the job longer – with no consideration of how up to date their knowledge and skills are – does not help keep Wisconsin’s universities in sync with the rapidly changing needs of its students or the marketplace,” the report said. “Quite the opposite.”

The report recommends that state legislators “remove language from statute alluding to seniority as a consideration when determining layoffs.”