NJ public school teaches Islam — but no other religions

CHATHAM, N.J. – Parents of students at Chatham Middle School are calling on the board of education to eliminate lessons on Islam from the 7th grade social studies curriculum they believe proselytizes the religion. 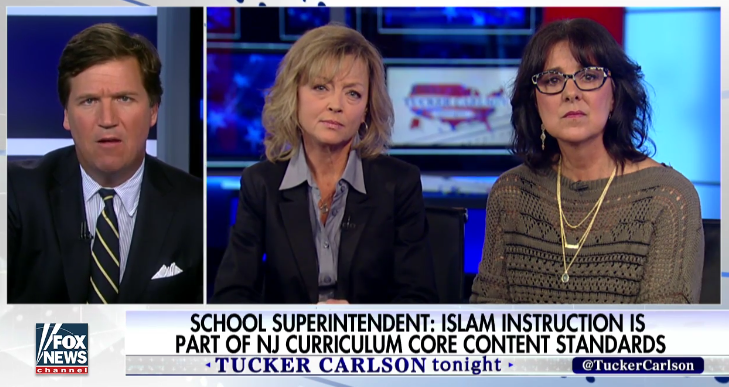 Several parents attended a board meeting Monday to take aim at materials distributed to students through a “World Cultures and Geography” class they believe cross the line, Tap into Chatham reports.

The parents emailed board members copies of the lessons they believe violate the district’s policy that “no religious beliefs be promoted or disparaged” and handed copies to others in attendance at the meeting, as well.

“In the Middle East and North Africa unit of the class students are taught about the five pillars of Islam in great detail, there are two videos on it, a 20-page PowerPoint presentation, class work, homework, and testing,” parent Libby Hilsenrath told the board. “In this unit, there is no mention of any other religion or teaching of it.

“… When it comes to teaching other religions at this level, it’s not done,” she said.

Hilsenrath went over many of the objectionable homework assignments with board members in detail, including lessons that require students to memorize and write the Islamic conversion prayer.

Another parent, Nancy Gayer, also addressed the board about the in-depth study of Islam. Videos of both women’s comments were posted to YouTube, and they appeared together on Fox News’ “Tucker Carlson Tonight” to air their grievances.

“I think it crosses the line because it teaches one religion and not all others,” Hilsenrath told Carlson. “It’s in a world culture and geography course and no other religion is taught. And to me, that’s not education, because in order to educate you need to teach all.”

“Would you be comfortable in a public school to say ‘Jesus is the way, the truth and the life, and no one comes to God but through me,’ and I don’t know that the school would say that.”

Gayer explained that her son’s experience in the district makes it clear educators are staunchly against Christianity in any context.

“I actually had an experience about three years ago. My son put together a fundraiser and it was a video production, and in the fundraiser, in the video production, he had a small quote of the Bible and they … pulled him aside and told him ‘this belongs in Sunday School’ but went ahead and told the class the video didn’t work,” she told Carlson.

“So I’m all in favor of teaching religion, if it’s all done in the same manner, the same depth,” Gayer said.

Both women said they’ve been denigrated as Islamophobes and racists for highlighting the unbalanced curriculum.

“We were labeled as bigots immediately following the board of ed meeting in an op-ed,” Hilsenrath said. “And then all over Facebook with people who knew us or didn’t know us – xenophobic, Islamophobes – it went as far as the KKK, which I don’t know what that has to do with this …”

“I was stared down at a grocery store too,” Gayer added. “It was pretty unnerving.”

The women contend superintendent Michael LaSusa refuses to meet with them regarding their concerns, and instead referred the issue to a district curriculum committee that meets in private.