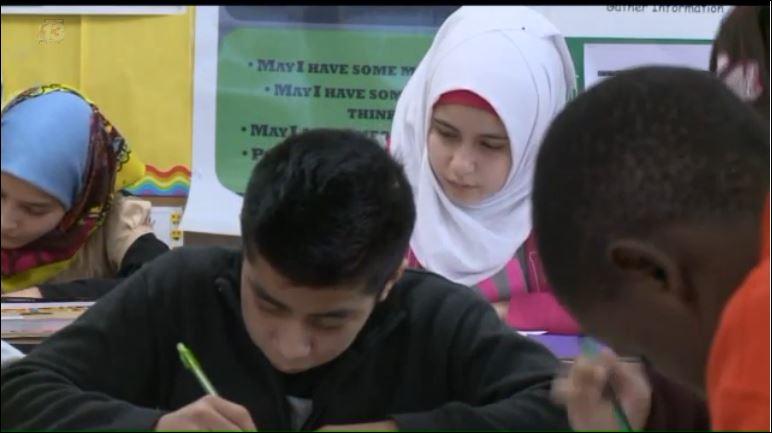 Many of the students come from violent countries like Honduras and El Salvador, and teachers are taking numerous steps to accommodate their cultures while introducing them to the language, WHOTV reports.

“When they first come, if we know that their culture is where they’ve only been used to all girls together or all boys together, then we make sure we seat them near the same gender students. Then we ease them into working with others,” Meredith Middle School Intensive English Language teacher Jillea Bueso told the news site.

“Passing things out with your right hand and not just your left” is important, she said, because “in some cultures the left hand is like a dirty hand.”

Other teachers are using music to coax non-English speaking students into participating in school, and to learn new ways educators can craft culturally sensitive lessons.

“Their cultural backgrounds just give me energy,” teacher Meredith Marlou Sayor told WHOTV. “My mission is to get to know those cultures and then to let our regular staff know it too because it’s the not knowing that keeps us from connecting with students.”

And the Des Moines teachers have their work cut out for them.

There are over 6,100 English Language Learning students just within the Des Moines Public Schools district. That means there are more ELL students in the City of Des Moines than there are in the states of Vermont, West Virginia, North Dakota, Wyoming, Montana, New Hampshire, South Dakota and Maine.

If Des Moines created its own school district just for ELL students, it would become the 14th largest district in the state.  Just below the total population enrolled within the school districts of Johnston (6,894) and Southeast Polk (6,797).

Several students said neither they nor none of their family members knew English when they moved to the United States, but the Des Moines ELL program helped them to navigate the country and school.

“It was hard because when we went to the store, I couldn’t answer anything. I got nervous and would run and hide any time someone started talking to me,” said eighth-grade student Gilmer Meja, originally from El Salvador.

Meja completed the six- to eight-week Intensive English Language Program at Meredith in 2014, and said it quickly changed his family’s experience in America.

“Now I feel safe to go to the store and to my friend’s to visit him. I am able to talk to anyone that speaks English,” Meja said. “Since I learned English, I feel like it’s my normal language.”

And that evolution doesn’t happen without a lot of extra work and dedication from Des Moines teachers, Bueso said, adding that the process can take several years before students are fully fluent.

“English, it takes 6-7 years to become fluent in reading, writing, speaking the language,” she said. “It’s kind of a little thing, but in our world it’s a huge step for them to go from nothing to composing a sentence.”