The award-winning school is well-known for its top-notch math and science programs, and parents are clearly paying attention. 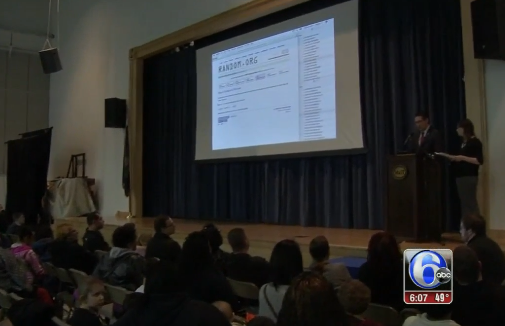 Out of the 96 openings, 75 of the openings were for kindergarten, and 67 of the spots went to families with older siblings already enrolled. In other words, most of the more than 9,000 applicants were vying for eight open kindergarten slots.

Michael O’Brian, a member of MaST’s alumni board and member of the school’s first graduating class, told WPVI his kids weren’t among those selected.

The K-12 school opened in 1999 and currently resides in an old steel factory on the Far Northeast. MaST – an acronym for Math, Science and Technology – works to engage students by incorporating their ideas into the learning process, and has been recognized by numerous companies, media and government education departments for excellent student achievement.

“The kids, it’s their place, so if there’s an idea they want to do here and we can make it happen, if we get that feedback, then we try to make it happen,” MaST CEO John Swoyer said. “We’re always looking futuristically at what’s coming next in education and what’s currently in the economy.”

The high demand for enrollment also highlights one of the founding principles of school choice as a catalyst for improving public education – that parents will flock to the best available schools for their children, leaving less desirable options to either improve or fade away.

“I want (my daughter) to have the best and we were hoping for here,” parent Bob Walton told WPVI. “If not here, then we will try somewhere else, from there college and maybe doctor.”

MaST is now opening a second K-3 school in Lawncrest, where officials will hold another lottery on March 7.

“The success is great, but we wish we could have more opportunities to offer kids a great education,” he said.

The Philadelphia charter school lottery underscores a survey by the American Federation for Children in January that found a staggering 68 percent of parents support school choice in general, and nearly three out of four support charter schools specifically, EAGnews reports.