DINWIDDIE, Va. – Parents, students and staff in Dinwiddie are sounding off after an assistant principal forced students to remove American flags from their vehicles at school. 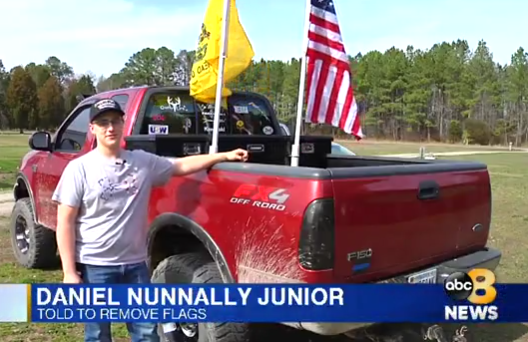 “I was I the middle of my second period weight training class and my assistant principal came in and pulled me out of class and told me that I had to go outside to take both flags off my truck so there was no controversy or anything,” said Dinwiddie High School student Daniel Nunnally Jr., who displayed both the American and Gadsden flags for President’s Day.

Nunnally, who is considering a career in the Army Reserves, recorded a video for Facebook as he headed to his truck Monday to remove the flag.

“Taking the American flag off my truck because you’re not allowed to fly it at school, it might cause controversy,” he said in the video.

“I kind of started getting angry because what’s the problem with the American flag?” Nunnally told WRIC. “I asked (the assistant principal), ‘is it the don’t tread on me (flag) that you have a problem with? Because I can go take that one down real quick, but she told me both of them.”

A WRIC reporter shared Nunnally’s Facebook post Monday night and it quickly generated nearly 50,000 views and many outraged patriots. School officials initially told the news site they asked Nunnally and another student to remove American flags out of concern the students could not see out their rear windows, but reversed course on Tuesday.

“I understand the confederate flag, if there was a problem with that, but this is the American flag,” said Nunnally.

Officials told WRIC on Tuesday they lifted the American flag ban after consulting with local law enforcement, which confirmed it’s legal to fly from a vehicle with two side view mirrors.

“My entire family fought and died under that flag,” he said.

The controversy convinced about a dozen Dinwiddie High School students to show up to school on Tuesday with their own American flags to show support.

Nunnally Jr. also posted a picture of his flags on his truck to Facebook with a message summing up his position: “I’m not sorry for being American.”

“This is something that represents my family and what they fought for,” he told WRIC.