Miller, among those considered by President Trump to head the U.S. Department of Agriculture, is a strong proponent of local control over school food decisions, a philosophy he’s put into action since he took over as Texas agriculture secretary in 2015. 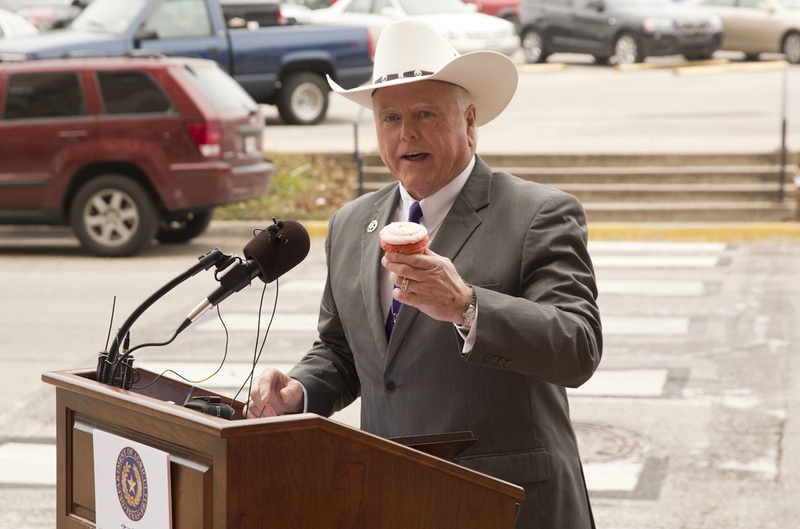 Miller came to office as schools across the country struggled to comply with federal food regulations on calories, fat, sugar, salt, whole grains, fruits, vegetables and other elements imposed through the National School Lunch Program at the behest of former first lady Michelle Obama.

The changes, known as the Healthy Hunger Free Kids Act, went into effect in 2012 and sparked immediate backlash from students, parents, school food service workers and others.

The federal regulations convinced many schools to ban birthday cupcakes and other treats sent from home, and created headaches for food service workers tasked with creating “healthy” meals that fit within the rigid federal framework. The situation resulted in many schools losing substantial lunch revenues from students who refused to eat the government-mandated lunches, and massive increases in food waste from those who picked through the food and tossed the rest.

“It’s healthy food, but the kids won’t eat it,” Miller said. “The kids leave school hungry so they stop at the convenience store and get some fried burritos … and that’s not healthy.”

“I get complaints every meeting I got. They always bring up the crappy food in the lunch rooms kids won’t eat, but we’ve kind of changed that dynamic in Texas,” he said. “First thing I did when I was elected two years ago was roll back the state mandates.”

Miller aimed to give schools as much control over food decisions as the federal government will allow, and was criticized by some when he eliminated a decade old ban on soda machines and deep fryers in schools.

“Michelle Obama and liberal do gooder friends don’t like this, but they just don’t understand. This isn’t about French Fries – it’s about Freedom. I believe we need fewer state and federal mandates and more local control,” Miller posted to Facebook at the time.

“I want to empower Texas school districts and their locally elected school boards to make the best decisions that are best for their schools without the State of Texas looking over their shoulder telling them that they cannot or must do something,” he wrote. “I think school boards, administrators, teachers, and, most importantly, parents should be in control of these decisions.”

The Texas Department of Agriculture followed up the move with the introduction of Farm Fresh Fridays, which promotes locally grown fruits and vegetables in schools, as well as “meet the farmer” days and other programs that helped actually connect students with the foods they eat.

“We try to recruit kids with that. If these kids get some dirt under their fingernails they can get it that way,” he said.

The department expanded on those efforts in recent years to create a network that connects local farmers with nearby schools, and also launched a summer program that connects culinary chefs, nutritionists, and others in the food industry with schools.

Five years after the Healthy Hunger Free Kids Act went into effect, the House Freedom Caucus and others are now calling on Congress and President Trump to repeal the regulations and restore some cowboy logic to school food decisions.

While there is currently no pending legislation to repeal the regulations, a Trump administration fixed on reducing regulations is taking root at the USDA. The Senate Agriculture Committee, meanwhile, is awaiting paperwork from the White House to schedule a confirmation hearing for former Georgia Gov. Sonny Perdue as Trump’s Secretary of Agriculture, Kansas U.S. Sen. Pat Roberts told Southeast AgNet.

“Insiders with the Department of Agriculture have hinted that a confirmation hearing and vote is likely in early-to-mid March,” according to the news site.