WASHINGTON, D.C. – The U.S. Department of Education is funding an “Access Islam” program on PBS LearningMedia that “is nothing more than indoctrinating students into Islamic religious beliefs, duties and action,” according to Christian Action Network president Martin Mawyer. 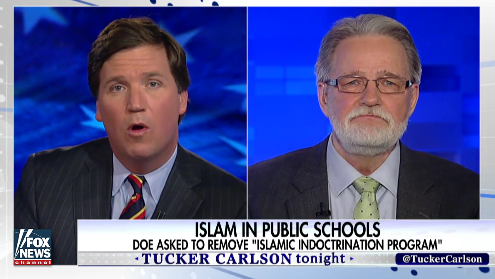 CAN sent a “Letter of Demand” to end the Islamic education program to both PBS and the Education Department, and is threatening a federal lawsuit if they fail to take action.

“So we took a look at these various programs that available for the public schools, and we were quite frankly shocked at some of the lesson plans students have to achieve in the classroom,” he said. “For instance, teachers are expected to ask their students, ‘What does a Muslim prayer sound like?’ ‘What do Muslim prayer movements look like?’ ‘What are some of the things Muslims say when they are praying?’

“And you have to ask yourself a question: Why does the federal government find it necessary that our kids – grades 5 through 12 – know what a Muslim prayer sounds like? … How can a teacher grade a student on these types of questions?”

In a press release, CAN highlighted lessons on the LearningMedia site that encourage students to “focus on learning about the core duties of Muslims,” and “read about what it means to proclaim faith or belief in a Muslim.”

Other assignments delve into the details on the Five Pillars of Islam and ask students to “watch the two streaming video segments about prayer preparation and the set of movements for prayer.”

“Students are also given a worksheet and on that worksheet they have verses from the Quran and Hadith. Then the student has to give the meaning of those verses, then they have to explain how those verses are used in the everyday life of a Muslim,” Mawyer told Tucker.

“Can you imagine the outrage if students were given the scripture from the New Testament and told they have to give the meaning, interpret that New Testament scripture, and explain how Christians use that scripture in their everyday life?”

CAN wants the program removed because the federal government doesn’t fund similar educational materials about other major religions.

“The DOE Islamic education program is not only a certain violation of the U.S. Constitution but a brazen and underhanded attempt to indoctrinate children into the religion of Islam. It must be removed immediately.”

CAN created the documentary “Islam in the Schools: A Quick Look” to raise awareness about publicly funded lessons on the religion.