LA school budget cut — because too many students are white

LOS ANGELES – Parents are outraged over a race-based school funding formula that’s driving budget cuts at a North Hollywood middle school – due to a higher percentage of white students. 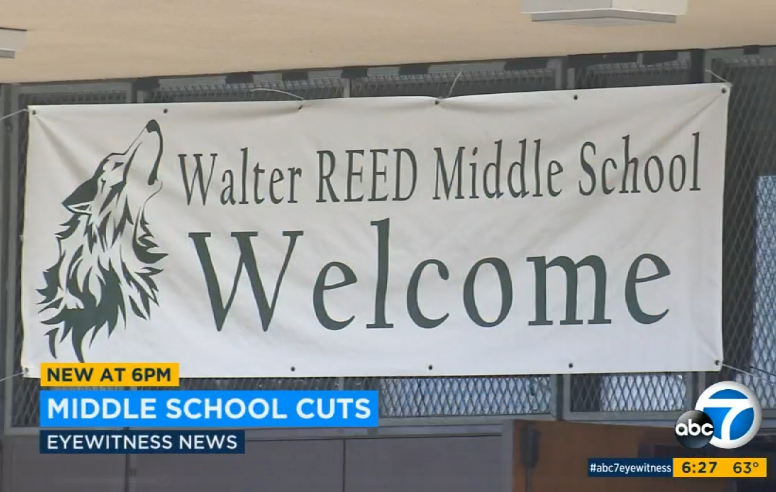 “A school qualifies for PHBAO status if 70 percent or more of its students who live within the school’s attendance boundary are identified as ‘Hispanic, Black, Asian, or non-Anglo,’” the letter from Local District Northeast Superintendent Linda Del Cueto read. “Under a court-ordered integration program that has been in place since 1978, PHBAO schools qualify for smaller class sizes and additional positions. When a school no longer qualifies for PHBAO status, fewer positions are funded.”

The letter explained that for the last two years Walter Reed has dipped below the threshold, and district officials removed its PHBAO status for 2017-18.

“It’s affecting funding because the more white people, the less money, so it’s a little bit of an interesting situation,” she said.

Another parent, Rosemary Estrada, said she’s concerned about how the change will impact students at the highly regarded middle school, regardless of race.

“When your class sizes are getting larger and you’re taking resources away from students, I mean as parents, you do want your kid to go out to college,” Estrada said.

Del Cueto’s letter contends district officials attempted to soften the financial blow by restructuring how funding is calculated, and are now using a per-pupil formula that will save some positions, though the change will still likely result in teacher layoffs, KABC reports.

“In order to maintain continuity of instructional services to students and families within demographic and budgetary realities, the District researched alternative funding models and has identified Reed as a ‘per-pupil spending model’ school,” she wrote. “Under this model, Reed will retain more teachers than originally anticipated and discussed at the March 15, 2017 community meeting.

“It is important to note that the school’s nurse, librarian, and counselor will not be impacted for the 2017-18 school year.”

The per-pupil approach appeased some parents, though class sizes and layoff are still looming.

Folks who commented about the situation online were far less diplomatic about their outrage.

“Students might have more money for students if they scaled back the huge pensions and medical plans for retired teachers and administrators,” Onus Jones posted.