MILWAUKEE, Wis. – Milwaukee Public Schools officials recently suspended a kindergarten teacher amid complaints she introduced an Ouija board to her classroom of 5-year-olds. 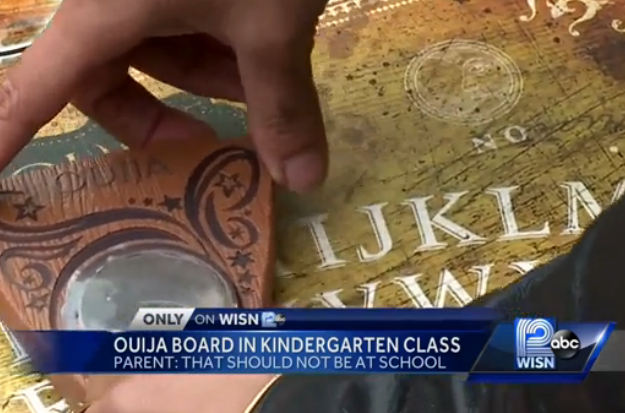 An outraged mother who did not want to be identified told WISN her 5-year-old son is having nightmares after his teacher at Zablocki Elementary School showed students how to use an Ouija board on Friday.

“They were shutting off the lights and shutting the windows or whatever and making it dark and talking to spirits,” the mother said. “That’s not something that should be at school.”

The Ouija board is a flat board marked with the letters of the alphabet, the numbers 0-9, and the words “yes,” “no,” and “good bye” that was designed in the 1880s as a means of communicating with the dead. Participants place their hands on a heart-shaped piece of wood or plastic called a planchette, which is supposedly guided by spirits to convey a message. “Ouija” is trademarked by Hasbro.

The Milwaukee mother said she emailed her son’s teacher when she learned about the Ouija board in class, and the response she received did little to relieve her concerns.

The teacher, who also was not identified, wrote that she’s had the board in class since Halloween, and students wanted to try it out.

“The kids have been asking for a scary story and I got the board and moved the paper clip to answer some of their questions,” the teacher wrote, according to WISN. “They asked about scary characters in movies. I did not say there were spirits. It was all done I fun.

“I understand your concern,” the teacher wrote. “It was silly and I’m sorry. I will take the board home and this won’t happen again.”

The concerned mother is now calling on district officials to fire the teacher while she struggles to help her son overcome the traumatic experience.

“He’s scared now to go to bed at night, to be in the dark, anything alone,” the mother said.

MPS officials told WISN the teacher is now on administrative leave pending an internal investigation. It’s unclear whether the leave is with pay, or without.

Folks who commented about the situation online offered mixed reactions.

“This isn’t a childsplay game,” Rachel Parry posted to Facebook. “No one of any age should be messing with a ouiji.”

“I had no idea so many people legit think a mass produced board game can communicate with or summon spirits or demons,” Alex Benson added. “Come on now, you’re embarrassing yourselves.”

“It’s a dangerous game,” Melinda Repich wrote. “I’ve had bad experiences and won’t have one in my house.”

“It was a bad decision on her part. Do I think she should be fired? No,” Becky Blair-Manges posted. “She seems remorseful and hopefully will learn from it. We have all tried something that seemed like a good idea at the time but in retrospect not so much. Granted this idea screamed disaster.”