NEW YORK – A New York City elementary school sparked controversy this week when it installed American flags and started a daily ritual of reciting the Pledge of Allegiance.

“Not having the pledge or flags was something a number of us were concerned about for years, and when we found out it was actually law – something I think may people don’t know – we started making calls to the (Department of Education),” a parent of a Peck Slip School student told DNAinfo. 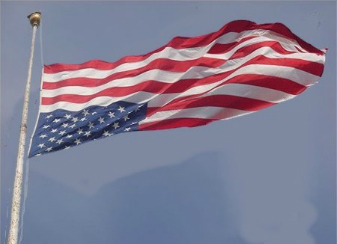 The parent asked not to be identified because the request has become a politically charged ordeal.

“It’s a shame that this has become politicized,” she said. “I’m not a Trump supporter, I just think the pledge is a tradition that honors our country and should be a part of our children’s lives.”

Some parents contend the school never installed American flags or made the pledge part of the daily routine when it started in the Department of Education headquarters in 2012. The flags and pledge were also missing when the school relocated to its current downtown location in 2015, according to the news site.

But the prodding by some parents eventually prompted principal Maggie Siena to email a notice to parents March 3 informing them the school was changing its ways and will now comply with state law.

“As per New York State Education Law 8NYCRR section 108.5, we will be offering an opportunity for students at Peck Slip to say the Pledge of Allegiance in class,” she wrote.

“Children and adults may opt out of saying the Pledge,” Siena wrote, adding that “children who know the Pledge and want to lead it will have the opportunity to do so over the loud speaker.”

The note apparently offended some parents who argued the pledge is divisive in the age of Trump.

“Both my grandfathers fought in World War II, and I love this country, but I don’t feel like the pledge is the right way to express that, especially at a school with lots of international parents and students who have never even heard about the pledge,” said a parent of a third-grader who did not want to be identified.

“I’ve never been comfortable with the ‘under God’ part – and as I looked into the history of the pledge, it does have anti-immigrant sentiment and we don’t need any more of that.”

Some parents at other Lower Manhattan schools that don’t recite the pledge seemed to agree.

“Our schools are very international, and I do not think that now, in light of Trump, if this was a decision that was forced upon us, and not something we would have decided as a school, it would be concerning,” Shannon Burkett, parent at P.S. 150, told DNAinfo.

Ironically, the divisive political climate is the same reason Oklahoma lawmakers are citing for a measure to encourage students to recite the pledge more often.

Oklahoma lawmakers introduced House Bill 2277 to require all public schools to recite the Pledge of Allegiance to the American flag every day, an increase from the current weekly requirement, KFOR reports.

“When I was in school, patriotism and the meaning of the Pledge were taught in class,” said state Rep. Terry O’Donnell, a Catoosa Republican.  By reciting the Pledge daily, school children are reminded of the loyalty, dedication and courage that has made and kept America the greatest country in the history of mankind.

“With all of the inflated political rhetoric, demonstrations and protests going on around the country, our school children need to understand that the current turmoil is not normal in America,” he said. “The Pledge of Allegiance symbolizes the unity and shared values of all Americans which we can never allow school children to forget.”

HB 2277, which provides exemptions for students who do not want to participate, passed the Oklahoma House of Representatives by a 93-1 vote on Monday, according to the news site.