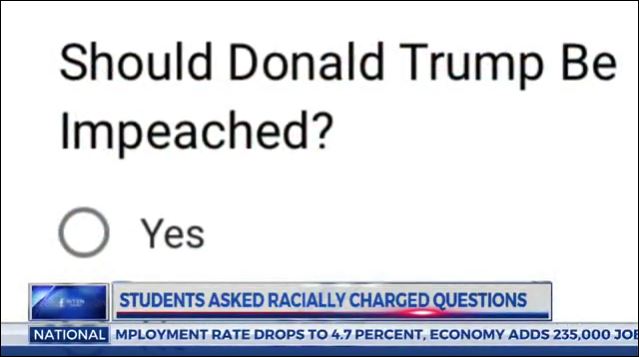 Senior Thomas Holmes told WTEN students were recently required to fill out two surveys – one on racial profiling and another on Donald Trump – but he refused and took his grievances up with the school principal.

The race survey asked students to identify with a race, then presented them with a series of questions about certain situations.

“A Latino man, a black man, and a white man commit the same crime on different dates. Who do you think is getting the longest sentence?” one question asked.

The answers provided required students to pick one of the three.

“A police officer raids a party to find a lot of teens with Marijuana. Who do you think he’ll assume is the drug dealer …”

“A cop pulls over a Mercedes who seems to be following all traffic laws. The driver of the Mercedes is most likely …”

“The only way you could answer it was, like, that you’re looking to be racist,” Holmes told WTEN. “You should have a right to what you want to answer and what you don’t want to answer.”

The other survey asked students whether Donald Trump should be impeached, and provided the possible answers of yes, no, and Option 3. Both surveys were riddled with grammatical and typographical errors.

The teen told his principal he won’t complete the surveys because they’re biased, and has not faced any consequences for the defiance.

“He said there’s nothing he can do about it because it’s a survey,” Holmes said.

Hudson High School officials ignored the television station’s requests for more information about the survey, and Holmes’ mother has a lot of questions.

“I just kind of want a response on what they intend – what their thoughts are on it … why they put it out, what they hope to accomplish from it because I really don’t see a point in it,” said Crystal Farwell, the student’s mother.

“It makes them pick and choose one against the other,” she said. “We kind of found it wrong to be asking questions like that.”

She’s not the only one. Several folks who commented online also criticized the surveys, and questioned why they were necessary to begin with.

“Is this what we are teaching kids in school?” Gary Raven questioned on Facebook. “No wonder kids are messed up and can’t even make change back for a dollar or don’t know how to use a can opener.”

“Well there’s the proof,” Mark Chambers posted. “Schools are purposely trying to dumb down kids. Like we don’t already have enough people in the world that think everything should go their way or the worlds against them because of their race, religion, sexual orientation, or life choices etc.”

“Indoctrination of our children in the public school system continues,” mallen299 posted in the NBC 4 comments.

“Shouldn’t the option they all get the same sentence been there?” Anya Williams added.

“Yes. Even if that isn’t realistic, it should still be the goal and a valid answer,” krisdaschwab912 responded.

“What is wrong with teachers?” BL Carter questioned. “Who would do this?”