Lahren was invited by ECU’s Turning Point USA chapter and Student Government Association to discuss her conservative views April 17, and the announcement is sparking vitriol and online threats from the campus’ tolerant left. 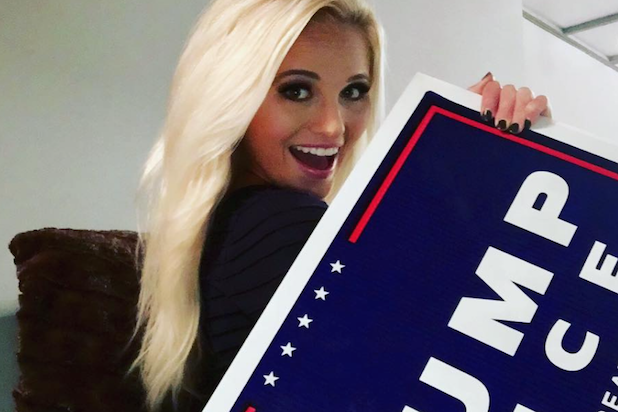 Lahren hosted the show “Tomi” on Glenn Beck’s The Blaze network before she was recently fired by Beck over pro-choice comments she made during an appearance on ABC’s “The View” last week. The 24-year-old is a strong Trump supporter with a massive social media following who regularly mocks the “snowflake” culture consuming college campuses.

And ECU students seem to be making her job easy.

“Burn the while University,” one student wrote on Twitter in reaction to her planned speech.

“Ecu is about to be a war zone,” another added, according to Campus Reform.

“Keep Toilet Lahren tf away from my school pls and thanks,” another student tweeted.

Others attacked Turning Point USA and vowed to launch a campus-wide protest to prevent her from speaking.

“@TPUSA_ECU is literally a white supremacist sympathy group @EastCarolina how y’all let this happen?” one student tweeted, according to The Washington Times.

“Who wants to start a campus wide protest with me to keep this crazy b**ch away from ECU?”

ECU Turning Point USA chapter president Giovanni Triana said the event is intended to expose students to opinions they might not like, and calls to censor Lahren “pose a problem to intellectual growth,” Campus Reform reports.

“Turning Point USA, in conjunction with ECU’s Student Involvement and Leadership, is hosting Tomi Lahren to expose students to a minority viewpoint on campus that is often underrepresented – stressing the importance of free speech, tolerance, and diversity of thought,” Triana said. “The decision to host Tomi Lahren was based on the aspiration to live up to ECU’s Creed that encourages students to ‘respect and appreciate the diversity of our people, ideas, and opinions.’”

Instead, many ECU students would rather level “racist and bigoted comments” at Tirana and Turning Point USA, and threaten riots similar to ones that shut down a scheduled speech by former Breitbart editor Milo Yiannopoulos at the University of California Berkeley in February.

Tirana said he’s already been forced to change his personal Twitter account “because of all the hate and vitriol I received from the left.”

ECU’s social justice warriors plan to be out in force when Lahren arrives for the hour-long speech at 7 p.m., WNCT reports.

Professors on campus, meanwhile, have expressed mixed views on the visit.

Marketing professor Tracy Tuten told Campus Reform she’s not surprised by the backlash, but is looking forward to hearing what Lahren has to say.

“I’m excited about Tomi Lahren’s visit and plan to attend her talk at ECU,” Tuten said.

Others, like chemistry professor Eli Hvastkovs, are siding with leftist students and offering up conspiracy theories.

“Who else thinks this is a ploy to start malfeasance at ecu so they can keep calling everyone snowflakes?” Hvastkovs tweeted.