MADISON, Conn. – A Connecticut high school teacher was sentenced to three years in prison for sexual misconduct with two teenage boys, one of whom she threatened with retaliation from the Mafia if he didn’t keep quiet. 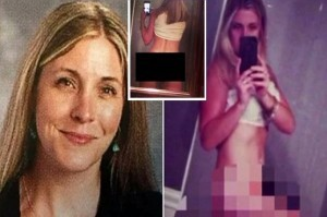 A father who testified at Marchese’s sentencing said “the actions done by this teacher and the school’s failure to protect our son from these actions has caused immeasurable damage.”

“I became a kid who had sex with a teacher,” one of Marchese’s victims testified. “I know it’s cool to do that in some cultures, but in my world it’s now considered shameful. I became the outcast, the pervert. I was one of these people who just wanted to fit in, so this was painful.”

Court records show Marchese, a married mother of two from Canada, repeatedly sent two students – a 15-year-old and a 17-year-old – seductive text messages, some with revealing pictures. Her arrest warrant also states she called the 17-year-old into her classroom, locked the door, and performed sex acts during school hours, the New Haven Register reports.

The classroom incident occurred in 2014, and the student messaged the teacher afterward that he was “freaking out” about the sexual contact. He allegedly asked Marchese for $200 to keep quiet about the affair before Marchese called both of her student victims to her classroom for a talk.

He told the students her father spent time in jail and has Mafia connections. She said her father would contact “his boys in New York” to intervene if the students alerted authorities, the Courant reports.

Parents of the victims testified at Marchese’s sentencing that she showed “no remorse” for her actions and called her a “sexual predator.”

“Sexual assault is not sexy,” one mother said. “When it happens to your son, it’s a nightmare for the family.”

Marchese’s defense attorney, William F. Dow III, countered that his client “feels regret and remorse” and piled on excuses for the “inappropriate conduct.” Dow said Marchese’s friend committed suicide, and her relationship with her husband – who was also her supervisor at school – was on the rocks.

“She is the mother of two children,” Dow said. “Tonight when she goes to bed, she cannot tuck them into bed. She will not be able to help them with their homework.”

Dow said “no one is entitled to monopolize the moral high ground,” and said his client is working “to look forward, not back” on her mistakes.

Superior Court Judge Melanie Cradle noted that Marchese “undermined the trust of students, parents and the community” with her actions.

“A teacher is a role model, somebody a student should look up to,” Cradle said. “A teacher should model appropriate behavior. Your conduct undermines those principles.”

Cradle sentenced Marchese to a total of four years in prison with one year suspended after she serves three years. She was fired from the school district and is now divorced, the register reports.

Her sentence also comes with five years of probation, a requirement to register as a sex offender for a decade, and a ban against contacting the victims or their families for a decade.

Students involved in the case are now suing the school district in civil court for failing to protect their children from Machese, and Cradle ordered the Madison Board of Education to preserve evidence for those cases.

“There was no mention made during the hearing of Marchese’s uncertain status after she is released from prison,” the Register reports. “As a Canadian citizen, she might face deportation.”