Mendoza, who has worked at several Houston Independent School District schools, was arrested Monday and charged with aggravated sexual assault of a child, just over three months after he was fired from the district over the allegations, KTRK reports. 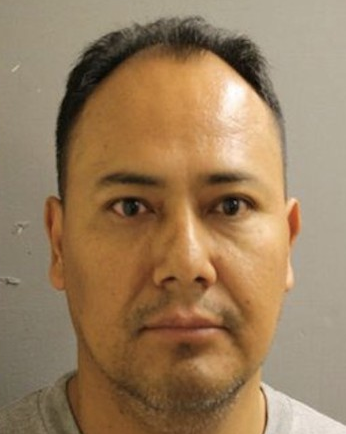 The victim’s mother discovered messages from Mendoza and her daughter’s cell phone in December and contacted school officials, who reported the situation to HISD police and Children’s Protective Services.

They also fired Mendoza and banned him from campus, New Fix reports.

The girl told authorities she had sex with Mendoza in the school library and his office, and a pregnancy test confirmed that she’s carrying a child, police allege.

“Police conducted a lengthy and thorough investigation, which they concluded this month,” according to a HISD statement. “Police presented findings from their investigation to the Harris County District Attorney’s Office, which accepted criminal charges.”

District officials have refused to discuss any details.

According to the Houston Press:

HISD would not reveal how Mendoza was employed at the middle school except to say he wasn’t a teacher or tutor. HISD also wouldn’t comment on what the allegations were, who reported them, what the relationship was between the child and Mendoza, or whether the child was male or female. In its press release, HISD described the alleged aggravated sexual assault as “inappropriate contact” with the student.

Mendoza posted a $50,000 bond and the judge required him to surrender his passport because he’s a native of El Salvador. Prosecutors do not believe he’s abused other children at different schools, KTRK reports.

The child rape case isn’t the first between a school employee and student to produce a pregnancy.

It’s not even the first case in the Houston area.

North Houston teacher Alexandria Vera, 26, was impregnated by her 13-year-old student boyfriend at Stovall Middle School last year after the two met during summer school. The student’s family supported the relationship and invited Vera to family gatherings, and were elated to find out she was pregnant with the boy’s child, EAGnews reports.

Vera, mother to a 6-year-old, later aborted the pregnancy when investigators began to question the two about the relationship. She eventually pleaded guilty to aggravated sexual assault of a child and was sentenced to a decade in prison in January.