The complaint centers on the Sterling Aviation High School teacher’s alleged anti-Islamic and anti-gay Twitter posts under the username @LordTiberius, an account that was recently suspended, NewsFix reports. 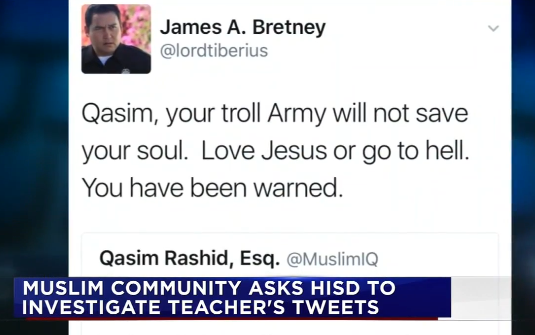 Messages posted to the account included “Islam is not welcome in the USA,” “Your religion is cancer,” according to the news site.

Others warned readers to “love Jesus or go to hell,” and “embrace Islam and you embrace death,” KTRK reports.

“Once we saw it we were very concerned by the nature of the tweets,” Houston CAIR executive director Mustafaa Carroll told NewsFix. “We hold teachers in high esteem, so whenever someone who is dealing with our children and making tweets against a significant number of our children who are Muslim, we’re concerned about that.”

CAIR is now pushing to meet with district officials to demand they review social media policies with school employees.

Bretney, who also created the comic “Blaze of Glory” about Operation Iraqi Freedom for Lucha Comics, hasn’t backed down from his views on Islam.

“This ideology is one that should concern every American,” he told NewsFix.

Bretney told KTRK he will “not acknowledge my employment” and claims it’s his right as an American to speak his mind. 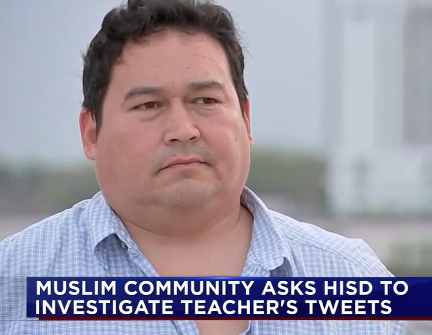 “This is the problem. We are in a spiritual conflict with Islam,” he said. “We are in a clash of civilizations with Islam.”

“I’ll tell you this, I’m not backing down,” he continued, “I’m a free American man.”

HISD officials, meanwhile, suspended the logistics and transportation teacher and told the media they “are aware of the tweets and will continue to investigate.”

Beyond Bretney’s anti-Islam activities, NewsFix also uncovered posts to Bretney’s Facebook page condemning the Supreme Court’s legalization of gay marriage, as well as a YouTube account that featured videos he produced with titles like “You Deserve Rape,” “Fat Lesbians Don’t Get Raped,” and “The Prophet Muhammed was a Rapist.”

Lucha Comics posted a letter on its website that said it is putting Bretney’s next two projects on hold until it can evaluate what happened.

According to Bretney’s LinkedIn page, he has been employed by HISD since February of 2016.