FORT WORTH, Texas – A transgender Texas student is complaining to school officials after an employee allegedly confronted the student – a biological boy — for using the female restroom during a class at a local college.

The Castleberry Independent School District initiated an investigation after 16-year-old Ishy Valdez complained about an incident Wednesday at Tarrant County College, where she attends classes with other students, KDFW reports. 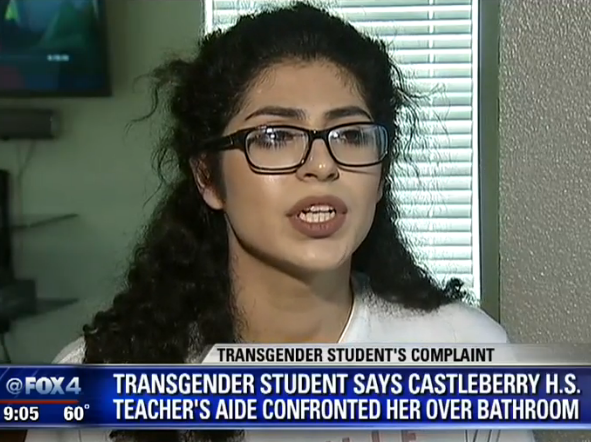 Valdez, who is biologically male but transitioning to a female, said she was confronted by a teacher’s aide who serves as a chaperone on the bus to the college after she exited the women’s restroom, and another student recorded part of the conversation.

Valdez and the teacher’s aide both contacted school officials about the incident.

“She cannot just go around and judge them because she doesn’t agree with it,” Valdez’s mother, Blanca Rodriguez, told KDFW. “I feel like if she goes into the men’s restroom there’s more a possibility of somebody hurting her.”

The incident comes amid heated debate nationally over access by transgender students to restrooms that do not correspond to their biological birth. President Obama last year issued a decree to all schools that demanded access for students based on their gender identity – what sex they feel inside – rather than biological gender, but the Trump administration reversed the directive this year.

The issue has sparked lawsuits from both sides of the debate, though much of the litigation stemmed from Obama’s now irrelevant decree, EAGnews reported.

Valdez told KDFW she believes the teacher’s aide had no business monitoring the student’s bathroom use at the college, and she went with her mother to file a formal complaint with the district on Friday.

“I won’t let someone’s views on me change the way I live my life,” Valdez said.

“In the women’s bathroom, I do feel more comfortable,” the teen said. “I never get a second look.”

School officials refused to discuss Valdez’s situation, citing privacy laws, but the superintendent confirmed officials are aware of the incident and investigating.

Meanwhile, Valdez said the teacher’s aide hasn’t been on the bus since the incident occurred, but is still working at the school.