YUCAIPA, Calif. – A California man is pushing to ban children of illegal immigrants from attending public schools in the Yucaipa-Calimesa Joint Unified School District and inspire similar action in other districts.

Joseph Turner, a 39-year-old father of two and founder of the nonprofit American Children First, filed a petition with the San Bernardino County Registrar of Voters this week to prohibit illegal immigrant students from attending public schools, and to require illegal immigrant parents of U.S. citizens to pay tuition to the district, the San Bernardino County Sun reports.

The proposal would calculate that bill by dividing the district’s budget by the number of students enrolled.

“I feel very confident this will qualify for the ballot,” he said. 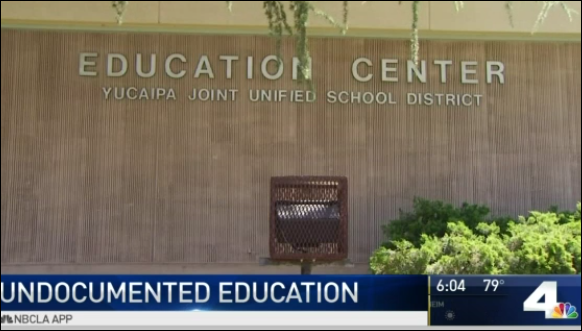 Turner, a former resident of the San Bernardino area who now lives near Los Angeles, told the news site he picked the Yucaipa-Calimesa district because voters there showed strong support for Donald Trump in the 2016 election, as well as the low signature requirement to qualify the measure for a public vote.

“I’m trying to basically elevate the discussion into the national consciousness,” Turner said.

“We spend billions of dollars a year roughly $15 billion educating the children of illegal aliens in our schools in California and that’s money that’s being stolen from American children that should be getting the best education possible,” he told NBC Los Angeles.

Academics and the ACLU are already shooting down Turner’s proposal, pointing to the U.S. Supreme Court case of Plyler vs. Doe and others that upheld free public education for illegal immigrants.

“California’s a different state, not to mention that it’s highly unlikely that the courts would want to revisit Plyler vs. Doe,” Pitney said. “This kind of strategy might have gotten more traction 20 or 30 years ago, but in the California of 2017, it has limited appeal.”

“It certainly does not seem like it would be constitutional,” ACLU of Southern California’s Sylvia Torres-Guillen said.

“Hopefully, the effect this will have is it will empower others in standing up against this kind of bias and discrimination and hatred, and certainly I would hope that school districts recognize their affirmative obligation to protect students and make sure they’re in an environment that is safe and conducive to learning.”

Superintendent Cali Binks issued a statement about Turner’s proposal that made it clear district officials have not cooperated with his efforts, and will continue to comply with Plyler vs. Doe, which “does not allow the district to ask about the immigration status of parents and requires our district to educate all children,” NBC Los Angeles reports.

“It was a surprise to our district, a surprise to me. I don’t know anybody who has had any contact with (Turner) from our district,” Binks told The Sun. “The district has not participated in any of his activities. We have not been involved at all with him at this point.”