The survey “How Comfortable am I?” posed the question regarding dozens of hypothetical situations and tasked students with ranking their comfort level on a scale of one to four, with one “not comfortable at all” and four “completely comfortable,” WPTV reports. 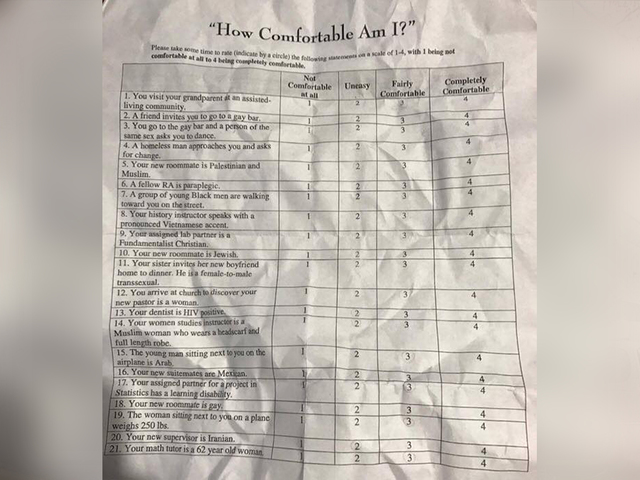 Some of the situations included:

“A friend invites you to a gay bar.”

“A homeless man approaches you for change.”

“Your new roommate is Palestinian and Muslim.”

“A group of young Black men are walking toward you on the street.”

“Your dentist is HIV positive.”

“The young man sitting next to you on the plane is Arab.”

“Your brother’s new girlfriend is a single mother on welfare.”

“You discover your teenage brother kissing a male friend.”

“Your black roommate gets a full-tuition minority scholarship.”

District officials did not name the teacher, who distributed the lesson to students in a “Leader In Me” class, but said she had only worked at the school since January.

“There were children that were saying this is wrong. ‘Why are we doing this?’ ‘Does this have a reason?’ She was going yeah this is kind of wrong … maybe I should take it back,” Drews said. “Kids were asking if they could share it with their parents. She was like, ‘No. Don’t show your mom. Don’t take that home. I’m taking it back up.’”

Of course, some students did show their parents the assignment, and they were not happy about it.

“’How comfy are you if you see a group of black men walking to you on the street?’ That’s completely inappropriate,” parent Jennifer Block said. “In no world, whatsoever, is that OK to question a child on.”

Regardless, district officials are seemingly siding with parents, and issued a prepared statement that said “in no way did this assignment meet the standards of appropriate instructional material,” the news site reports.

“After being made aware of the assignment, school administration began an investigation and has taken immediate disciplinary action,” the statement continued. “This teacher was within her probationary period and has been released from employment.”