LIVERMORE, Calif. – A Monday fight between two girls at California high school ended with one in the hospital after suffering a seizure and the other facing felony battery charges.

The fight started with one of the girls pummeling the other in the face before the two fell to the ground and wrestled. Witnesses told KPIX the aggressor got in numerous punches before she was pulled away, leaving the second girl convulsing on the ground in a seizure as other students filmed the incident with their cell phones. 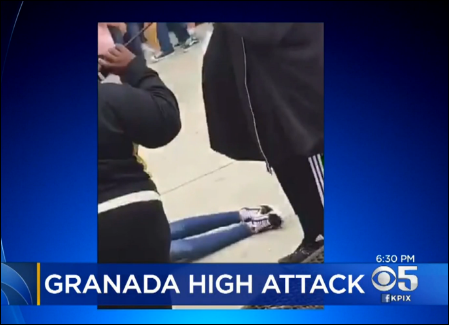 “She had a thing against the other girl, and it got pretty bad really fast,” student Valeria Gutierrez told NBC Bay Area.

The fight occurred during lunch in the quad area at Granada High School and officials responded “within seconds” to the melee, but the video shows hundreds of students gathered around just stood by and recorded the girl’s agony, many posting videos and pictures to social media.

“I just saw her laying there and start having a seizure,” sophomore Berlin Faiaupau told KPIX. “It was the scariest thing I ever saw.”

First responders rushed the teen to Eden Medical Center, where she was treated and later released. The girl is now recovering at home. The other student was arrested and charged with felony battery.

“Here’s an opportunity to step up and a lot of them didn’t,” he said. “And you feel like, disappointed is a good word. I would’ve thought better things would’ve happened.”

Van Schaack said the incident illustrates that “when you’re not intervening, you’re also part of the problem.”

Superintendent Kelly Bowers told the Livermore Patch she was especially perturbed that students posted images from the incident online, and officials are now demanding they remove the posts.

“While the circumstances of the incident were heinous,” she said, “what is equally disturbing is the reaction some people have had about it. Far too many students were crowding around, filming the incident, and discussing it on social media afterwards. While situation at lunch was very upsetting, the misrepresentation of the events and the speculation on social media were also very troubling and hurtful.”

Bowers vowed a “thorough investigation followed by strong legal and district consequences,” but did not detail the potential punishments.

At least one local parent learned about the situation online and wrote in to the Patch to register her disgust.

“This is why I was so adamant that my children attend a private school for as long as possible. Stuff like this didn’t happen there,” she wrote. “There’s videos swarming the school about it and everyone is laughing.

“There should be a zero violence policy. The aggressor should be expelled and prosecuted. Our children should be able to go to school, get an education and just be kids without having to worry about this stuff.”

Students at the school told KPIX many of the videos and pictures of the fight were removed from social media, but some still remain behind locked Instagram accounts.