DALLAS, Ga. – A Georgia kindergarten teacher faces multiple misdemeanors after officials allege she was drunk at school, with a loaded handgun in her purse.

A staffers at Shelton Elementary School in Dallas, Georgia alerted administrators when they noticed teacher Melanie Bullard smelled of alcohol around noon on Thursday, and a school resource officer was called in to investigate, The Dallas New Era reports. 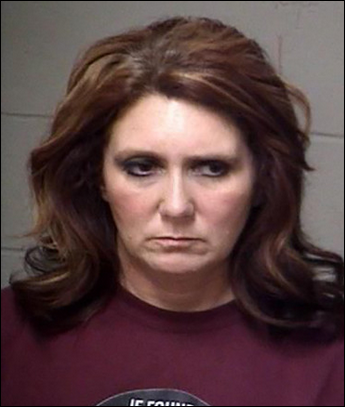 “When the SRO administered a portable alco-sensor evaluation to the teacher, she tested positive for alcohol. Per their policy, an additional evaluation was conducted a short time later which also produced a positive outcome,” according to the news site.

The test results prompted the school resource officer to search Bullard’s classroom for open alcohol containers and they found something else instead.

“During that search, they discovered that the teacher had a loaded semi-automatic pistol in her purse,” the New Era reports. “The purse was located on the floor underneath the desk which was within her classroom.”

The officer took possession of the pistol, and arrested the 39-year-old on possession of a weapon on school property and reckless conduct, Paulding County Sheriff’s spokesman Sgt. Ashley Henson told the Atlanta Journal Constitution.

Bullard was held in county jail overnight and was released Friday on a $3,500 bail, KSTP reports.

District officials refused to discuss the incident with the West Georgia Neighbor because it’s a “personnel issue,” a spokeswoman said.

“The district’s personnel policy states employees who test positive for alcohol use on school property have the option of going through medical treatment or resigning,” according to the site. “The Paulding school board has called for a special meeting April 11 to discuss personnel issues, though no reference was made to a specific case.”

“The safety of our students is our top priority,” spokeswoman Suzanne Wooley said in a statement to The New York Post.

Parents who commented about the incident online were not impressed with the teacher’s choices, though many seemed more concerned about the alcohol than the gun.

“Drinking on the job is no buenos … especially around kids,” Andrew Lo wrote. “But regardless of whether the teacher was intoxicated or not, that gun would still be capable of stopping a school shooting.

“It doesn’t bother me that she had a gun on her at all.”

“I think teachers should be able to carry,” Melissa Dunham added. “I’d feel safer for the kids really.”