EWING, Ky. – Parents of students at two Kentucky elementary schools were shocked when they learned about an “animal pornography” video shown to their children in a Spanish classes Tuesday.

“Nothing more than animal pornography. I mean, there’s no other description for it,” said Heather Prushing, whose 11-year-old daughter watched the video at Ward Elementary.

“And it’s so hard to keep them to where they have any innocence, in this day in age anyway,” she told WKYT. “You don’t expect to send them to school and have that kind of thing shown to them.”

Prushing and other parents watched the roughly 5-minute video on YouTube after their children came home from school talking about it.

It starts with warning and mock “R” rating:

The video shows teens dressed as animals as they perform simulated sex acts and speak in Spanish. In one scene, a chicken and a cow imitate sex, Ward parent Johnica McDaniel told LEX18.

“I was like, no way, it’s got to be some sort of April Fool’s joke,” McDaniel said. “There is no reason it should have been show to elementary kids, or any kid for that matter.”

“I literally got sick to my stomach,” McDaniel told WKYT.

McDaniel said it was clear the video left an impression on her 9-year-old daughter.

“She said ‘Yeah mommy but I do not know what that chicken was doing to that cow,’” she said. “And my heart just sank. It really did.”

“It’s questions that we shouldn’t have to answer because to me there’s no explanation for it, because no matter the age they are, they shouldn’t have seen it,” Prushing said. “I’m an adult and I didn’t want to see it.” 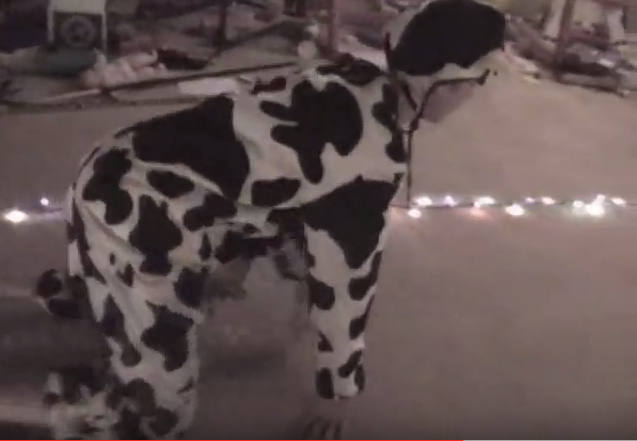 WKYT would not broadcast the video because of profanity and “strong sexual innuendo.”

Superintendent Brian Creasman told LEX18 he suspended the tenured teacher who played the video for students, and outlined what the district is doing about it in a letter to parents Thursday.

He wrote that the video was shown in several Spanish classrooms at Ward and Ewing elementary schools in recent days, and the video was not part of the district’s curriculum or approved for use by school or district administrators. District officials plan to work with elementary principals on “course programing” for the rest of the school year, Creasman wrote.

“This video is not aligned to the expectations that have been clearly communicated to all stakeholders. What I have reviewed thus far strikes at the heart of the district’s vision to become a ‘District of Distinction,’ as the supplemental video does not prepare students to become college, career or life ready,” the letter read.

Several mothers who spoke with WKYT said they believe the teacher responsible for the incident, who has worked in the district for numerous years, should “retire and bow out gracefully.”