HOPE MILLS, N.C. – A Cumberland County grandmother is sounding off after she alleges her 12-year-old grandson was left handcuffed and bloodied after an altercation at a school dance. 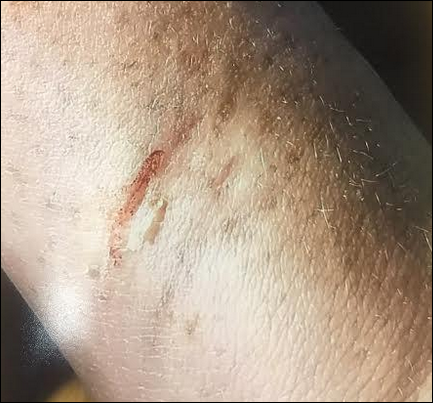 Pamela Millard told WTVD her grandson Tyler Skipper got into a scuffle with another student at a Gray’s Creek Middle School last month that ended with the boy in handcuffs in the school office.

Millard said she was called to pick up Skipper around 3 p.m. on March 17 and found the child crying and bleeding from his writs when she arrived.

According to the Fayetteville Observer:

Millard, who said she has custody of her grandson, took him to Cape Fear Valley Medical Center around 9:30 p.m. after he began screaming of pain, she said. A doctor diagnosed him with a muscle strain in his neck and an altered mental status, according to paperwork she provided.

A school psychiatrist reported the boy was suffering from post-traumatic stress disorder and recommended that he spend the rest of the school year at home receiving intensive therapy, according to documents from Millard.

Cumberland County Schools superintendent Frank Till Jr. also declined to comment on the situation and referred questions from an Observer reporter to the sheriff’s department.

Millard told WTVD her grandson suffers from ADHD and believes the boy’s condition played a role in the incident. She contends the officer’s actions were over the top, and he should have de-escalated the situation rather than treat the boy like a criminal.

“He spent six days in ICU at Cape Fear for trauma, he had a spinal top, and a MRI to determine if it was a physical issue,” she said.

The grandmother said her ultimate goal is to force officials to reconsider how they handle students who lash out in hopes of preventing a similar problems with other students in the future.

“I’m looking for the policies to be looked into how these kids are being handled in school,” Millard said, “and as far as Tyler is concerned making sure he gets the best care possible.”

The initial police report about the incident alleged the boy damaged school property – a $15 whistle – in the melee, but Swain told the Observer the family will not be required to pay for it. Skipper also will not be charged with any crimes, he said.

The student is now being homeschooled for the rest of the school year, mostly because he continues to have problems stemming from his arrest.